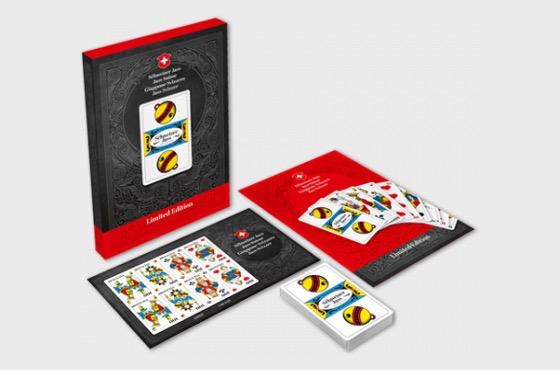 Do you play the “Schieber” variation? Or are you a “Differenzler” fan? Stöck! Bock! If these terms don’t mean anything to you, you must be one of the few Swiss people who don’t enjoy the game “Jass”, Switzerland’s number one national pastime.

Swiss Post is introducing a subject that is familiar throughout Switzerland to the stamp world with a sheetlet and four stamps. Whether you’re young or old, at the pub or in your own home, a stickler for the rules or a more relaxed player, Jass is enjoyed all over Switzerland. SRF’s “Samschtig-Jass” programme and its predecessors have been running since 1968, making it the oldest entertainment programme in Europe. This fact alone is testament to just how popular the game is. The special stamps depict the different playing cards used in various regions.

In German-speaking Switzerland the four suits are bells, shields, acorns and roses, whereas people in Western and Southern Switzerland play with hearts, diamonds, clubs and spades. One group says “Ober” and “Under”, while the other sticks to “Queen” and “Jack”. The Jass divide mainly runs along the Brünig-Napf-Reuss line and the Aare river.

In the Canton of Aargau, there are even municipalities where the different types of cards are used in separate parts of the same village!