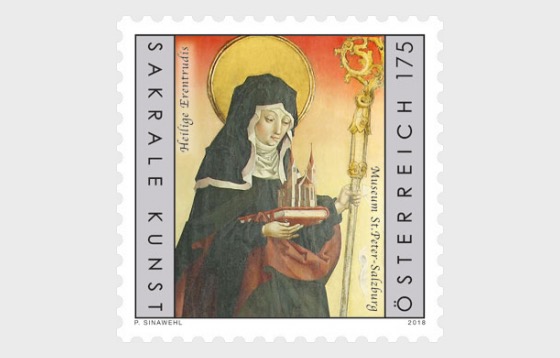 The “mother” of the province of Salzburg

St. Erentrude, also known as the “mother” of Salzburg, died 1,300 years ago. This engraved stamp from the “Religious art in Austria” series is dedicated to her.

It is thought that St. Erentrude was born in 663, as she was said to be 55 years old when she died. She came from a noble family from Worms and followed her uncle, St. Rupert, to Salzburg. He had travelled south as a missionary and became the first bishop of Salzburg in 696.

Bishop Rupert founded St. Peter’s Abbey in the city of Salzburg. In around 714 he had NonnbergAbbey built below the Hohensalzburg fortress for his niece – Erentrude became the first abbess of the nunnery. Like Erentrude, her fellow nuns were also of noble birth and well-educated. The nuns’work was dedicated to the care of the poor and sick as well as the upbringing and education of adults and children, especially girls.

Erentrude is believed to have died on 30th June 718; this is the date now dedicated to her memory in the Catholic church. Together with St. Rupert and St. Virgil, she is a patron saint of the diocese of Salzburg and is depicted holding a staff and a church. Her image on the commemorative stamp comes from the former altar of St. Margaret’s Chapel in St. Peter’s cemetery and was created inaround 1500 by Georg Stäber. Today it can be seen in the museum of St. Peter's Abbey.

The Benedictine nunnery Nonnberg Abbey is the oldest nunnery still in existence in the world. It was not until the 15th century that nuns who were not from the nobility began to be accepted. On oneside the abbey's grounds border on the fortress’ curtain wall, on the other sides they fall awaysteeply so that major expansion was not possible. The 11th-century monastery church, dedicated to the assumption of Mary into heaven, was destroyed in a fire in 1423 and rebuilt over the following decades.