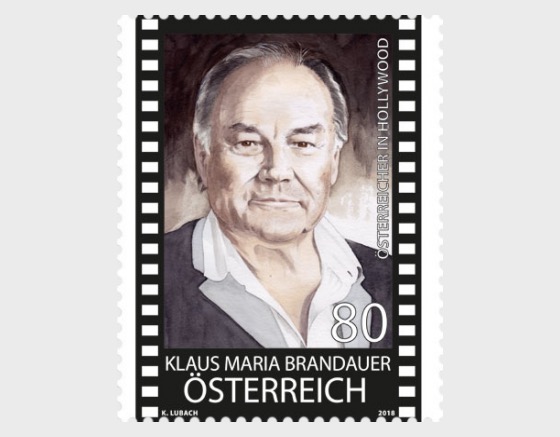 From Bad Aussee to Hollywood

He is one of Austria's best and most internationally successful actors: Klaus Maria Brandauer. To celebrate his 75th birthday, the actor is now being honoured with an illustrated portrait on acommemorative stamp in the “Austrians in Hollywood” series.

Brandauer was born Klaus Georg Steng on 22nd June 1943 in the Styrian town of Bad Aussee, lateradopting his mother’s maiden name as a stage name. He broke off his studies at the University ofMusic and Performing Arts in Stuttgart abruptly in order to devote himself entirely to acting. The young actor had his debut in 1963 at the Landestheater Tübingen, subsequently enjoying further engagements, including at the Theater am Josefstadt in Vienna. Since 1972 he has been a member ofthe company of Vienna’s Burgtheater.

Brandauer had his international breakthrough in the film industry in 1981 with the legendaryportrayal of Hendrik Höfgen in “Mephisto”, an Oscar-winning film by István Szabó. This was followedby further successes, playing the villain Largo in the James Bond movie “Never Say Never Again”, in the spy thriller “The Russia House” or alongside Meryl Streep in the drama “Out of Africa”. For hisrole as Baron von Bixen, he was rewarded with a Golden Globe and an Oscar nomination. The actor also garnered international fame as Colonel Redl in the film of the same name.

As a true thespian, however, Klaus Maria Brandauer has, to date, always felt a particular attachmentto the stage, playing “Jedermann” at the Salzburg Festival, for example, or “Hamlet” and “King Lear”at Vienna's Burgtheater. He also teaches at the Max Reinhardt Seminar in Vienna. Brandauer is also increasingly employed as a theatrical and operatic director, in 2006 directing Bertolt Brecht's“Dreigroschenoper” in Berlin and Richard Wagner’s “Lohengrin” in Cologne. He is also repeatedly tobe seen and heard in musical-literary programmes.

Klaus Maria Brandauer has received many awards for his artistic work and for his social engagement.These include the Nestroy Theatre prize for his life’s work, an honorary doctorate from the ParisLodron University in Salzburg and the Golden Medal of Honour of the City of Vienna.