2018 Thinking Outside the Square Set of Mint Stamps - Set 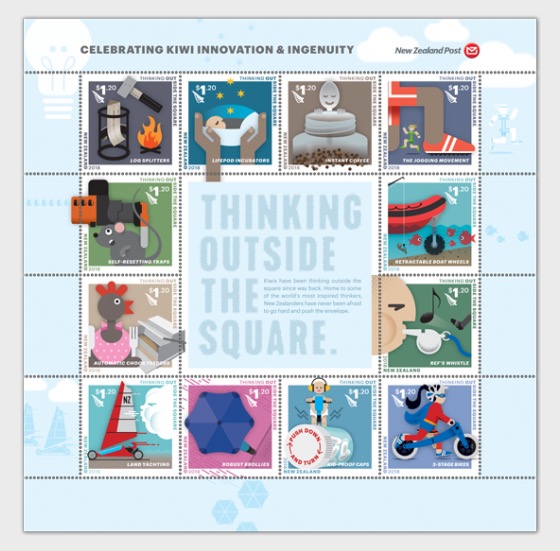 About 2018 Thinking Outside the Square Set of Mint Stamps

Home to some of the most resourceful minds, New Zealand is a nation full of thinkers and makers who love to push the envelope. For starters, there’s the jetboat, electric fence, and bungy jumping. We’re well known for our ‘number 8 wire’ mentality, given we’ve used it to repair just about everything imaginable. This stamp issue celebrates some of these nifty ideas that are truly 'outside the square'..

When it comes to ingenuity and thinking outside the square, Kiwis win hands down. In fact, we’re world-famous for it! Backyard inventors, dreaming up widgets and gadgets, and all manner of things made from ‘number 8 wire’. Stuff that people didn’t know they needed until they saw or used it. That’s what sets us apart from the rest of the world. Here are just a few of the cool creations New Zealanders have come up with.

In 1884, 24-year-old Cantabrian referee William Harrington Atack was the first to realise he could save his voice by putting his dog whistle to good use on the rugby field.

Invercargill merchant David Strang became the first person to create and sell commercial instant coffee when he patented his ‘Dry Hot-Air’ process in 1890.

Kiwi runner and athletics coach Arthur Lydiard (1917-2004) popularised jogging as a way to get fit by building stamina bit by bit.

Designed to withstand winds of up to 117kmph, Greig Brebner's high-tension canopy Blunt umbrellas are named for their rounded, injury averting edges.

Originally designed by 13-year-old Ayla Hutchinson for a 2012 school science-fair project, the Kindling Cracker is used to safely split wood, without losing a finger.

Frustrated with pests eating his chicken feed, retired dairy farmer Bill Kirkham designed Grandpas Feeders to quite simply open and close when chooks step on and off the clever stainless-steel contraptions.

In 1999, New Zealand hang-gliding and land-sailing enthusiast Paul Beckett tinkered in his Papamoa garage until he had a prototype for the Blokart - a fast wind-powered land yacht that kicked off a now international competitive sport.

Primarily, this is a boat you can easily launch and retrieve. Auckland electrical engineer Maurice Bryham originally designed the prototype for Sealegs Amphibious Craft with wood and Lego.

Rich Latham built the first prototype of ’the world’s first recycled children’s bike’ in his bathroom. Designed to save on waste and cost, Wishbone Bikes transform from trike, to little bike, to big bike.

After moving to New Zealand in the 1960s, Italian expat Claudio Petronelli designed a palm-and-turn prototype cap in metal and patented a plastic design in 1969 that is still used today.

The Mondiale ‘LifePod’ incubator was designed by inventor and scientist Sir Ray Avery for developing countries where millions of babies die each year due to lack of neonatal care. One incubator can save at least 500 lives by providing newborns with a safe, sterile, temperate environment.