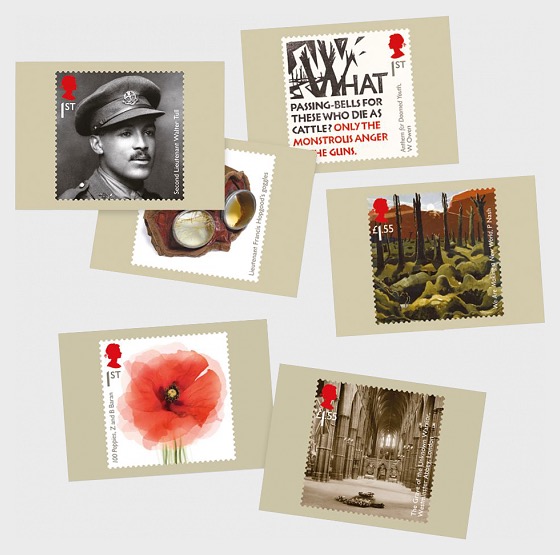 About The First World War 1918

Following the series themes of Poppy, Poetry, Portraits, War Art, Memorials and Artefacts, the Mint Stamps also feature David Gentleman's cameo head of The Queen in Royal Mail Red, echoing the colour of poppies, that most poignant symbol of remembrance. They are also brought to you in pristine, unmarked condition. The set comprises 3 x 1st Class and 3 x £1.52 Special stamps.

POPPIES, HOWARD HODGKIN
In May 1915, Canadian military doctor Major John McCrae wrote a short poem entitled 'In Flanders Fields', which drew upon the image of delicate poppies and spoke with the voice of fallen soldiers, calling on their comrades to continue the struggle. The verses helped to turn the flower into a symbol of remembrance throughout the English-speaking world. Poppies, an abstract work by London-born artist Howard Hodgkin, was inspired by poppies from Normandy in France and was executed as a carborundum print. Hodgkin won the Turner Prize in 1985 and was knighted in 1992.

RIFLEMAN KULBIR THAPA
Rifleman Kulbir Thapa was serving in 2nd Battalion, 3rd Queen Alexandra's Own Gurkha Rifles, when his unit attacked German lines on 25 September 1915, the first day of the Battle of Loos. Though wounded and separated from his battalion, he was able to reach the German front line. Finding an injured British soldier nearby, Kulbir stayed with him all day and night, before carrying him to safety the next morning. Despite his injuries, he then returned to the German trenches and rescued two fellow Gurkhas. For these selfless acts of heroism, Kulbir became the first Nepalese Gurkha to be awarded the Victoria Cross.

THE KENSINGTONS AT LAVENTIE, ERIC KENNINGTON
Painter and sculptor Eric Kennington joined the London Regiment in 1914, but was wounded and discharged in 1915. During his recovery, he worked on The Kensingtons at Laventie. Painted in reverse by applying oil paint to a sheet of glass, this extraordinary picture depicts Kennington (left background in a black balaclava) and several identifiable comrades resting in a ruined village after an exhausting spell in the trenches during the winter of 1914-15. A complex composition, the painting honours the fortitude and solidarity of ordinary soldiers.

CAPE HELLES, GALLIPOLI, TURKEY
In this image, British photographer Ernest Brooks captures a British soldier at a comrade's grave at Cape Helles in an evocative sunset silhouette. Brooks was particularly keen on using silhouettes, as by rendering soldiers less recognisable, their outlines came to symbolise unknown soldiers. Cape Helles, on the southern tip of the Gallipoli peninsula, had witnessed bloody fighting on 25 April 1915, as a British division.

LONDON IRISH RIFLES' FOOTBALL FROM LOOS
On 25 September 1915, the first day of the Battle of Loos, this football was booted out of British trenches by Private Frank Edwards. Kicked across no man's land by Edwards' comrades in 1st Battalion, London Irish Rifles, it became entangled in German barbed wire as British soldiers overran the enemy position. Though disapproved of by his officers, Edwards' action may well have offered a welcome distraction to men faced with a dangerous advance through heavy fire. Preserved in the London Irish Rifles' Regimental Museum since the war, the football underwent special conservation treatment in 2011.