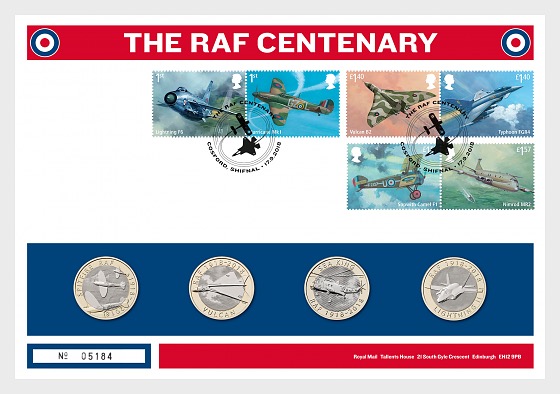 About The RAF Centenary

2018 is the 100th anniversary of the Royal Air Force and this stamp issue pays tribute not only to the significant part it has played in British military history but also to its ongoing role of protecting the country and its interests, providing humanitarian assistance and saving lives.

The Royal Air Force (RAF) is the United Kingdom's aerial warfare organisation and is the oldest independent air force, i.e. independent of army and navy forces, in the world. The Royal Flying Corps (RFC) was the air arm of the British Army formed in 1912 until it merged with the Royal Naval Air Service on 1st April 1918 to form the Royal Air Force.

This stamp issue commemorates the 100th anniversary of the RAF and pays tribute not only to the significant part it has played in British military history but also to its ongoing role of protecting the country and its interests, providing humanitarian assistance and saving lives. It also highlights the bravery and heroism of its personnel and the innovation and technological advancement that has helped make the RAF the envy of the world.

In the First World War the initial use of aircraft was as reconnaissance for trench warfare. The invaluable nature of such reconnaissance craft was underlined by the emergence of fighter aircraft to destroy them. This led to designs of faster scout and fighter planes with increasingly powerful engines and armaments including bombs. By the end of the war the RAF’s strength was 188 squadrons and nearly 291,000 personnel with 22,647 aircraft but the size of the service was significantly reduced.

The service policed British overseas territories while its pilots and engineers engaged in record- breaking activities in altitude and distance. By the 1930s the threat of war led to an expanded service and reorganisation. New designs of fighters such as the Hawker Hurricane as well as bombers were introduced to modernise the service and make it battle-ready. Nevertheless, even before the start of the war, the RAF was considered the last line of defence.

During the Second World War, the RAF reached a total strength of 1,238,606 men and women, of whom 193,313 were aircrew. In the Battle of Britain in 1940, the RAF defended the skies over Britain against the numerically superior German Luftwaffe. In what is perhaps the most prolonged and complex air campaign in history, the Battle of Britain contributed significantly to the delay and subsequent postponement of invasion plans. In the course of the war approximately 70,000 RAF personnel were killed.

Following victory in the Second World War, the RAF underwent significant re-organisation, as technological advances in air warfare saw the arrival of jet fighters and bombers. During the early stages of the Cold War, as Britain developed its own nuclear weapons, the government decided that the RAF’s fleet of new V-bombers would have this responsibility. The Vulcan was one of these designated crafts. When the strategic nuclear deterrent passed to the Royal Navy's submarines in 1969, the RAF's nuclear ro38le was reduced to a tactical one.

For much of the Cold War the primary role of the RAF was the defence of Western Europe against potential attack by the Soviet Union, with many squadrons based in West Germany. Extremely fast interceptor jets were the first line of defence against aggressor bombers. One of the largest actions undertaken by the RAF during the Cold War was the air campaign during the 1982 Falklands War, in which the RAF operated alongside the Fleet Air Arm. Following a British victory, the RAF remained in the South Atlantic to provide air defence to the Falkland Islands, based at RAF Mount Pleasant (built1984).

With the end of the Cold War and the collapse of the Soviet Union, the RAF's focus returned to expeditionary air power and since 1990 the RAF has been involved in several large-scale operations: the 1991 Gulf War; 1999 Kosovo War; the 2001–present in Afghanistan, the 2003 invasion and war in Iraq and most recently the 2011 intervention in Libya..

The Lightning represents the fastest British-made fighter of all time, being the first supersonic craft to enter RAF service (in 1959). It featured two Rolls Royce engines in a unique ‘stacked’ configuration and its power allowed for take-off and a rate of climb faster than any other jet. Later variants (the F.6) were capable of twice the speed of sound and it was the RAF’s principle interceptor for 20 years.

The Hurricane is credited with winning the Battle of Britain, accounting for 55% of German losses, as well as essential service during the Dunkirk evacuation and was the RAF’s principal single seat night fighter facing German bombing raids in 1941 and 1942. Hurricanes also saw action in the defence of Malta, North Africa and the Far East.

The Vulcan is the iconic delta wing bomber and a major UK engineering triumph. Designed as a high altitude bomber it entered service in 1956 and was withdrawn in 1984. It was part of the V-force which were designed to carry Britain’s nuclear deterrent. The more powerful B2 entered service in 1960. When the nuclear deterrent passed to the Royal Navy submarines in 1969, the role of the Vulcan became one of a tactical bomber. It was called into action in the Falklands Conflict of 1982.

The state of the art fighter – one-third British and the current principal craft defending UK skies and increasingly deployed in overseas activity. It is a multi-role fighter, first deployed to the RAF in 2003 and first saw active service in Libya in 2011. It can fly at up to 55,000 feet and at Mach 1.8. At full strength the RAF will operate 160 craft. Markings of No 3 Squadron recommended (as historic squadron and first to fly aeroplanes).

The Nimrod was introduced in 1969 for maritime patrol, surveillance and anti-submarine roles. Sophisticated radar and electronic surveillance equipment was in the extended nose and tail. The upgraded MR2 entered service in 1979 and was deployed in the Falklands Conflict and in the Gulf War. It’s enhanced capabilities also permitted search and rescue operations. It was retired from service in 2010.

The Sopwith Camel F1 is the best known and most successful Allied WW1 fighter and scout aircraft though it was difficult to fly and required huge skill. Credited with shooting down almost 1,300 enemy aircraft it was also successful as a ground attack craft. Squadrons of Camels were also important for home defence, protecting cities from Zeppelin raids.