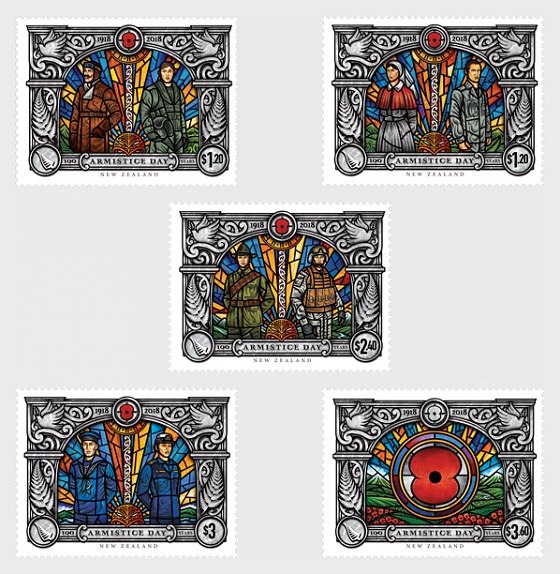 In many countries around the world, the fallen of the First World War are remembered on 11 November. To commemorate 100 years since the Armistice, New Zealand Post has created a stamp and coin programme to reflect this significant milestone in our history, and to honour the men and women who served then, and those who serve today.

New Zealand Post is proud to have developed a series of commemorative Armistice collectable stamps, designed by New Zealand artist Dave Burke. Four of the stamps represent past and present members of the armed forces, and a fifth stamp features the RSA poppy.

The vast majority of the 100,000 New Zealanders who served overseas during the First World War were in the infantry, artillery and supporting units of the New Zealand Expeditionary Force formed in 1914. By 1918 most were serving in the New Zealand Division on the Western Front. A New Zealand Army with Regular and Territorial Force components was formally established in 1950. In 2018 its 4,500 regulars and 1,600 reservists make up more than half the strength of the New Zealand Defence Force.

More than half of New Zealand’s 700 registered doctors served in the Medical Corps during the First World War, as did 550 nurses of the New Zealand Army Nursing Service. Advances in treatment by 1918 had significantly improved injured men’s chances of survival. Battlefield medicine has continued to evolve, aided since the Korean War by swift evacuation by helicopter. The First World War also saw the first recognition of wartime psychological injury. Then dubbed ‘shellshock’, it was more recently termed post-traumatic stress disorder.

New Zealand’s main contribution to the First World War in the air was the privately organised training of hundreds of pilots for service in British squadrons. A New Zealand Permanent Air Force was established within the New Zealand Military Forces in 1923, and a separate Royal New Zealand Air Force was set up in 1937. In 2018 its 2,500 regulars and several hundred reservists mainly perform surveillance and emergency relief roles, flying NH90 and Super Seasprite helicopters and long-distance Orion and cargo-carrying Hercules aircraft.

During the First World War, the Royal Navy cruisers stationed in New Zealand waters in peacetime were sent to the Mediterranean. The battlecruiser HMS New Zealand, part of the British main fleet, had been paid for by New Zealand taxpayers but was largely manned by British sailors. A New Zealand Division of the Royal Navy established in 1921 was succeeded by the Royal New Zealand Navy in 1941. In 2018 its 2,500 personnel and 10 ships patrol New Zealand’s huge Exclusive Economic Zone and provide emergency relief at home and overseas.

Red poppies first evoked wartime loss following the publication of ‘In Flanders Fields’, a poem written by Canadian doctor John McCrae for a dead friend. After poppies were adopted as official symbols of remembrance in the United States and France, the practice spread across the British Empire. In 1921 the New Zealand Returned Soldiers’ Association ordered 250,000 artificial poppies from the French Children’s League. The late arrival of the shipment forced the RSA to postpone the first Poppy Day Appeal from Armistice Day 1921 to Anzac Day 1922.

The miniature sheet displays the New Zealand flag over a black background.

This is the premium collector’s item for the Armistice 1918-2018 stamp issue. Read more about the flow-on effects of the end of WW1 with copy by David Green, an historian at Manatū Taonga, the Ministry for Culture and Heritage.