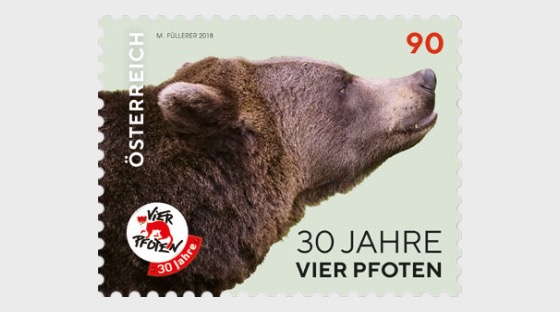 About 30 Years of FOUR PAWS

In 2018 the animal welfare charity FOUR PAWS is celebrating 30 years of existence. Austrian Post is honouring its decades-long commitment to animals with a commemorative stamp.

FOUR PAWS was founded in 1988 by the Austrian Heli Dungler. The international organisation still has its headquarters in Austria, whilst fifteen branches around the world are able to provide rapid assistance where it is needed. FOUR PAWS helps animals around the world and actively promotes protection of animals through sustainable projects. The organisation aims to make people aware of animal welfare through educational work and campaigns. Constructive solutions are devised in collaboration with experts and financed with the help of donations and sponsorship.

The focus for FOUR PAWS’ work is on animals which are directly influenced by people. These includedomestic and working animals, but also stray cats and dogs. Wild animals such as bears and big cats which are not being cared for in a manner appropriate for the species are also a focus for the animalwelfare charity. So, for example, in 1998 the “BÄRENWALD” bear sanctuary was established inArbesbach in Lower Austria as a place where bears that formerly belonged to circuses or bears that have been kept in captivity can be given a permanent and suitable home. In South Africa the“LIONSROCK” big cat refuge provides a habitat for lions, tigers, leopards and cheetahs that were previously vegetating in tiny concrete zoo enclosures or that were intended as game for trophy hunters. In Kenya the mobile animal ambulance cares for injured animals and orphaned elephantcalves in Tsavo National Park. In the “Forest School” in Borneo, young orphaned orang-utans learn the skills they need to survive. In the South Asian state of Myanmar, former working elephants andorphaned calves are prepared for life in the wild at the “ELEPHANTS LAKE” elephant protectioncentre.

The design on the commemorative stamp shows the brown bear Erich. Together with his mother and sister, he was given a new home in the BÄRENWALD in Arbesbach in 2015 after having previously led a miserable existence in an animal park in Upper Austria, which was shut down by the authorities in 2012.