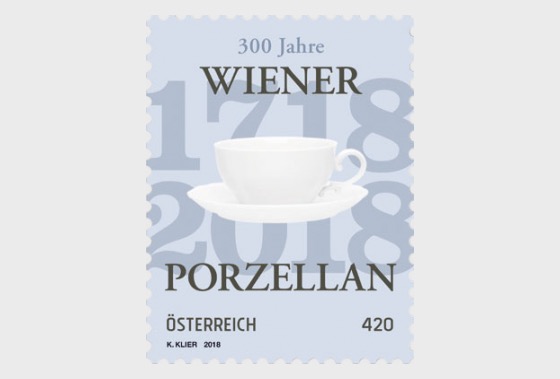 The Wiener Porzellanmanufaktur (Viennese Porcelain Manufactory) was founded in Vienna’s Alsergrund district in 1718. Austrian Post is now celebrating the anniversary “300 years of Viennese porcelain” with a commemorative stamp.

Valuable porcelain objects, which had been imported via adventurous routes, mostly from China,were already considered absolute “must have” items as early as the 16th century. When the so-called“arcanists” finally discovered the secret of how to make the “white gold” in the 18th century, the European upper class was definitively seized with “porcelain fever”. Emperors, kings, princes andeven the up-and-coming bourgeoisie began to set up their own factories.

One of the first to open its doors was the Wiener Porzellanmanufaktur under the management of the Hofkriegsrat (central military administrative authority) agent Claudius Innocentius du Paquier. On 27th May 1718 Emperor Charles VI signed a special privilege granting the manufactory a monopoly throughout the empire. In 1721 the porcelain manufactory moved to the street whose name stillbears witness to this today: Porzellangasse in Vienna’s 9th district. After the privilege expired, Empress Maria Theresa took the manufactory under Imperial ownership in 1744. Since then, every piece that leaves the manufactory has borne the cobalt blue and white striped shield under the glaze as the trademark of Viennese porcelain.

The art of porcelain

The Viennese Porcelain Manufactory closed its doors in 1864. In 1923 investors from the group around the great designer and founder of the Wiener Werkstätte Josef Hoffmann became aware ofthe rich heritage and opened the “Neue Wiener Porzellanmanufaktur Augarten” in the Baroque park of the same name. Since that time the Augarten manufactory has continued the traditional craft and lived out the tradition of artistic innovation. As a result, right through to the present day fine porcelainware continues to be created here based on designs from every era, from the Dubsky pattern on Baroque shapes through tea sets and figurines by the most important Art Deco designers to contemporary interior and product designs.

The special stamp is the first to have a denomination of EUR 4.20. Its design shows a printed classic Baroque style teacup with painted embellishment.