200th anniversary of the birth of Cosme García Sáez - Set 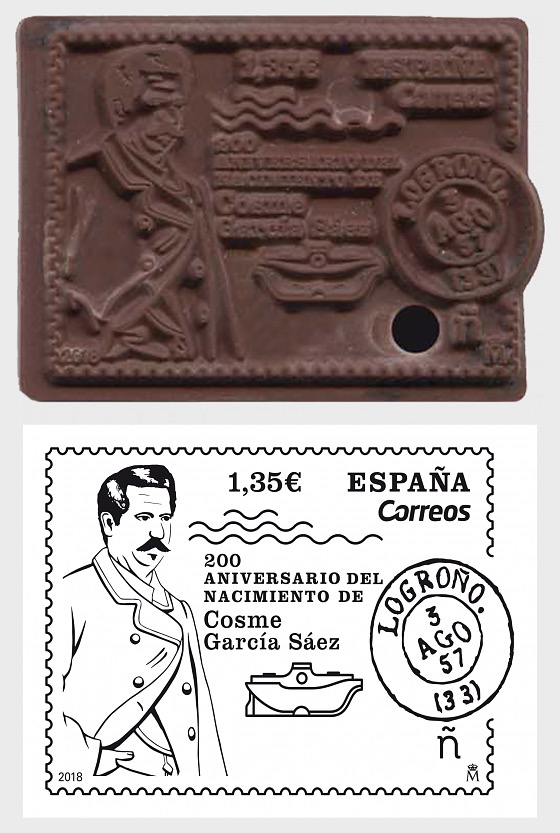 About 200th anniversary of the birth of Cosme García Sáez

With the issuance of this seal, Correos intends to pay a well-deserved tribute to Rioja Cosme García Sáez, one of the many forgotten geniuses of our country. Born in Logroño on September 27, 1818, in the bosom of a humble family. Restless and self-taught, from a very young age he showed a great facility for mechanics and technical studies, which he would shape years later in the creation of inventions related to weapons, printing, mail and nautical.

He moved to Madrid at the beginning of the Progressive Biennium and two years later, in 1856, he presented his first three inventions: a back-loading rifle, a portable printing press and a device "for all kinds of ink stamps". The latter was adopted by the Post Office in 1857 to mark, on the front of the letters, the date of issue and, on the reverse side, the date of arrival, hence its name: date 1857 or Type II, replacing the 1854 model o Type I. The steel stamp of great quality and manufactured abroad, left an imprint formed by two concentric circles of 19.5 and 11 millimeters in diameter. In the center appears the data, with expression of the day, the first three letters of the month inclined to the left and the last two figures of the year. In the upper part of the circular crown the name of the town and in the lower the capital of the respective province; when it is a main Administration, its hierarchical number appears in the lower part. This type of dater was used until the late 1870s.

The capital obtained from the sale of some 600 dating machines and the maintenance of the same between 1857 and 1861, served Cosme García to continue in his career as an inventor. During his visit to the main Administration of Barcelona he discovered the sea for the first time and immediately began to develop his most famous patent: the submarine. The tests of his first model were made in the waters of Barcelona in 1858, one year before the Ictíneo I of Narciso Monturiol.

As it could not be less, Correos innovates in the stamp dedicated to an inventor; the paper is replaced by rubber and the motif appears in relief: the silhouette of Cosme García, the sketch of the submarine under the waves, the legend and the imprint of the 1857 dashboard, which protrudes from the right side of the effect.