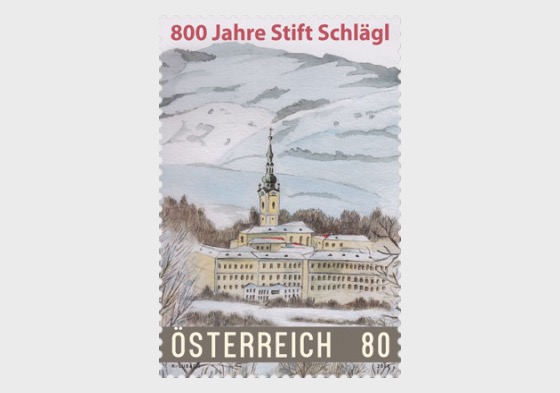 About 800 Years of Schlagl Abbey

A historical centre for the region

In 2018, Schlägl Abbey in Upper Austria's Mühlviertel region is celebrating the 800th anniversary of its existence, and Austrian Post is congratulating it on this major anniversary with a commemorative stamp.

Schlägl Abbey was founded at the start of the 13th century, originally as a Cistercian monastery. After the monks left the establishment because of the inhospitable living conditions, the abandoned abbey was taken over by the Premonstratensian Order from Bohemia a few decades later. Arguments over the re-establishment of the abbey resulted in the foundation charter being dated to 1218. In the 13th and 14th centuries, the Premonstratensians cleared much of the area, which had, until then, been only sparsely populated, and founded many communities, which subsequently formed the area for which Schlägl Abbey was responsible for the spiritual welfare. The Hussite wars, the wake of the Reformation, the Thirty Years’ War and, finally, the Nazi era all brought the abbeyrepeatedly to the brink of ruin, but somehow the abbey community always managed to find a way to thrive after these crises. The Early Baroque abbey complex which stands today largely dates from the early 17th century. It was extended in the 19th century with the addition of a neo-Baroque library and a portrait gallery.

From yesterday to today

Nowadays Schlägl Abbey is not just the religious and spiritual centre of the region, but also a cultural one. The convent houses 38 canons, who, as a spiritual community, engage in spiritual welfare, religious instruction, science and culture and in managing the abbey’s assets. Schlägl Abbey also runsa conference centre, multiple restaurants, and has had a successful brewery for more than 400 years. The Abbey also owns around 6,500 hectares of woodland, which is sustainably managed.

In the 17th century the Gothic abbey church was decorated with Baroque elements and equipped with an organ which is still there to this day. The high and side altars with their artistic intarsia work date from the 18th century, as does the carved choir stall. The sacristy houses valuable liturgicalobjects such as a Gothic bishop’s staff from around 1490.