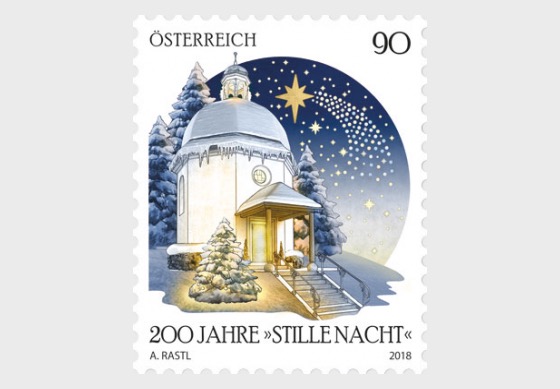 This Christmas carol is known throughout the world: on Christmas Eve “Silent night, holy night” ringsout around the world in many different languages. 200 years ago it was sung for the first time in the church in Oberndorf in the province of Salzburg.

Two years earlier, in 1816, the assistant priest in Mariapfarr, Joseph Mohr, had written a poem withthe name “Silent Night! Holy Night!” On 24th December 1818, now working in the parish ofOberndorf, he showed the poem to the organist and schoolteacher from Arnsdorf, Franz Xaver Gruber, and asked him to compose a melody for it. It was to be an arrangement for two solo voices and choir with a guitar accompaniment. The organist quickly completed his task, and the new Christmas carol was performed that very evening at the Christmas mass by Gruber and Mohr, and was very well received by the people of Oberndorf.

Legend has it that the song was only written because the organ in Oberndorf’s St. Nikola Church was unusable and a song was therefore needed that could be sung without an organ accompaniment.

From Oberndorf to the whole world

“Silent Night” was initially performed in the surrounding municipalities. Organ maker Carl Mauracherfrom the Ziller Valley learnt the song while travelling to Oberndorf and Arnsdorf and brought it back to his home region on his return. From there it was spread further afield by the singers the Rainer family and the Strasser sisters: it was heard for the first time in Leipzig in 1832 and, just a short time later, in 1839 in New York. Initially the song was believed to be an old folk song, and it was only in1854, through Franz Xaver Gruber’s “Authentic Origins of the Composition”, that his and Joseph Mohr’s authorship became known. “Silent Night” has been translated into more than 300 languagesand is today sung around the world at Christmas.

Today the Silent Night Chapel, the subject of the illustrated Christmas stamp, stands on the site where the church once stood. The Silent Night District in Oberndorf also houses a museumcommemorating the song’s creators, and memorial celebrations and a large Advent market are held every year in Silent Night Square.