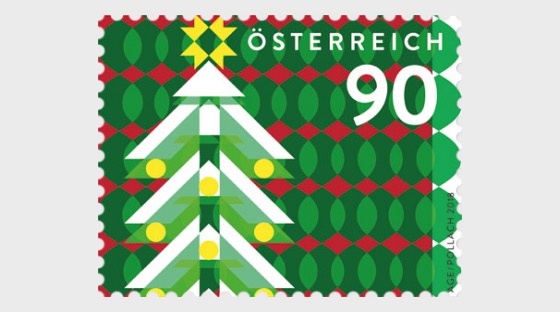 In our society, a beautifully decorated Christmas tree is an integral part of Christmas. The modern graphic design of the tree on this Christmas stamp is especially attractive.

The Christmas tree on the illustrated stamp is composed of geometric elements: circles, trapeziums and triangles make up the green tree and the snow-covered branches, with yellow spheres gleamingat their ends and a large star adorning the top. The stamp’s background is filled with the classic Christmas colours of green and red.

The origins of the Christmas tree can almost certainly be traced back to pagan religions: green twigs were a symbol of fertility and vitality. Fir branches were hung in the house to keep evil spirits at bay and in the hope that it would make the following spring a better one. In the Middle Ages people decorated their house and home with evergreen fir, juniper or mistletoe branches, and over time it became the norm to decorate these branches with fruits.

The earliest evidence of decorated Christmas trees dates from the end of the 16th century, when fir trees hung with sweets, nuts and apples were put up in Alsace, a custom which quickly spread in bourgeois homes. From 1730 on, the trees were also lit with candles; adding decorations made of glass or other materials was only introduced in the 19th century. Thanks to emigrants, the Christmas tree's triumphal march continued overseas.

For a long time the Catholic Church frowned upon Christmas trees, determined that they should not cast the Christmas crib and the baby Jesus into the shade. It is only since 1982 that a Christmas treehas been put up in St. Peter’s Square in Rome.

Today decorating the tree with shiny baubles, stars, figures and tinsel or with straw stars, pine cones and wax figures is an important and atmospheric part of our Christmas preparations. Whether using real candles or electric lights, shiny colour-coordinated decorations or decorations made of natural materials, the Christmas tree is the focal point of the celebrations with the family gathering around it on Christmas Eve.