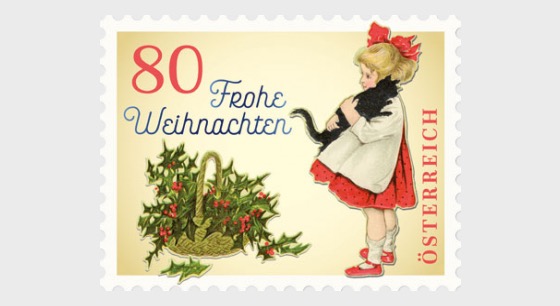 When it comes to stamps and postcards, Christmas motifs have always been popular – after all, Christmas is a time when we think of sending a special message to our loved ones.

The designer of this delightful Christmas design is not known, but what is known is that it was published for the first time on a picture postcard printed by the postcard publishing company Raphael Tuck & Sons in England in 1914. This London publishing company was founded in 1870 by Raphael Tuch (sic!), who was born in the Polish city of Wroclaw in 1821, and specialised in greetings cards and picture postcards. It enjoyed its most successful period in the Victorian era. This is hardly surprising, since stamps and postcards were “children” of the 19th century. The publishing house wasso successful that it was appointed supplier to the British court and Adolph Tuck was even awarded a knighthood in 1910. The company issued its first Christmas postcard in 1871.

A hint of Christmas nostalgia

The design shows a blonde-haired girl with a red ribbon in her hair, wearing red shoes and a red dress with a white pinafore. In her arms she is holding a black cat, providing a nice contrast in terms of colour. Other than the writing on the card – “A jolly Christmas” – the only pictorial evidence of Christmas is the basket of holly in the foreground. In German holly has a range of alternative names including winterberry and a name that speaks for itself: Christdorn meaning Christ’s thorn.

Vintage (from the English meaning “from a particular period”) means that there is reference to a bygone age, whether used for utilitarian objects or, as in this case, for pictures. Vintage designs like this one allow the observer to immerse themselves in a lost world and are often masterfully designed.