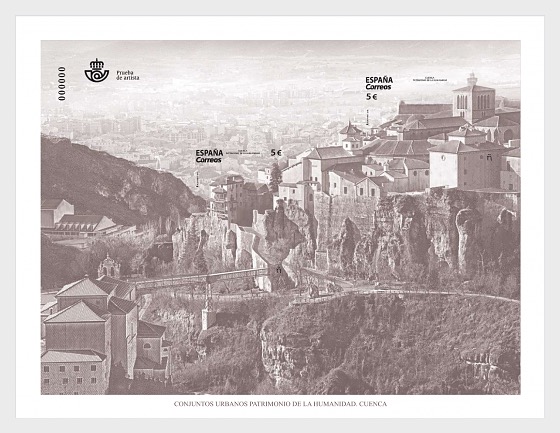 Cuenca - Collectibles for only GBP £7.27

This year the city of Cuenca is the star of this new chalcography in the series World Heritage Cities.

A mini sheet with two stamps depicting details of the monumental city of Castilla-La Mancha is the latest in the series, which last year won an award at the 2017 Belgian and European Philatelic Art Grand Prix in the category Chalcographic Stamps, with an issued mini sheet on the city of Granada.

On this occasion, one of the stamps features a view of the old city of Cuenca, in which we see the San Pablo bridge and the world-famous Hanging Houses.

The other shows a detail of Cuenca Cathedral with the Torre del Ángel, the lantern tower which lets light into the interior.

In 1996, UNESCO made the historic town centre a World Heritage Site, due to its shared human values in a cultural area in the development of its architecture, technology, arts, town planning and landscape design, and as an outstanding example of an architectural site illustrating significant stages in human history.

This walled city blends the natural landscape with its historic architecture. This was also an important factor in UNESCO’s decision, so the World Heritage Site declaration not only applies to the historic town centre and the Castillo district, but to the Júcar and Huécar river gorges around the city and the neighbourhoods of San Antón and Tiradores.

Cuenca, set on an outcrop above the meeting of the city’s two rivers, surrounded by spectacular landscapes and with buildings that defy the laws of gravity, offers beautiful views such as those seen in this new mini sheet, a worthy addition to a series which depicts some of the most wonderful places in Spain.