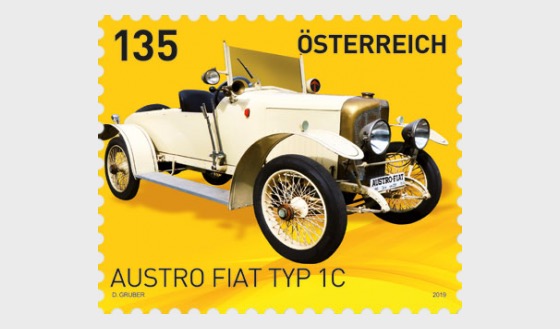 It was in the year 1907 that the Italian Fiat company founded an Austrian branch, the joint stock company Österreichische Fiat-Werke AG, known as Austro Fiat for short. This special stamp from the“Cars” series shows one of the cars made there: the Type 1C.

While the Austro Fiat works in Vienna's Floridsdorf district originally produced vehicles for Fiat, even before the start of the First World War, the company was also manufacturing its own cars and lorries as well as buses and a range of engines. A brief affiliation with the Daimler works and Puch was dissolved in 1927, and the company was renamed the Österreichische Automobil-Fabriks- Aktiengesellschaft (ÖAF). From 1936 the company Maschinenfabrik Augsburg-Nürnberg AG (MAN) became the majority shareholder in ÖAF, and from then on ÖAF manufactured diesel engines under licence to MAN.

During the Second World War it primarily produced lorries. After the end of the war, the factory, which was in the Soviet zone, was taken over by the USIA (Administration for Soviet Property in Austria) and finally passed into majority ownership by the Republic of Austria in 1955. After taking over the car manufacturer Gräf & Stift in Vienna's Liesing district, the company traded as Österreichische Automobilfabrik ÖAF Gräf & Stift. ÖAF was privatised in 1970 and has since been part of the MAN Truck & Bus Corporation within Austria, which produces lorries, heavy goods vehicles and special vehicles at its Upper Austrian site in Steyr.

The wonderful two-seater Type 1C vehicle from 1913 depicted on the special stamp is an Austro Fiat town and touring car, of which only very few have survived. The four-cylinder unit construction engine with a capacity of 2.2 litres has an output of 24 HP at 1,800 revs and a maximum speed of around 70 km/h.

What was particularly noteworthy about the Type 1C was the quiet engine construction, the engine being enclosed in a sealed housing with an aluminium cover. The double-jet carburettor ensured low consumption. The Austro Fiat Type 1C was equipped with a thermosiphon cooling system, an improved Fiat multi-disc clutch and a four-speed gearbox. A specially constructed flexible cardan joint made the vehicle very smooth to start and steer.