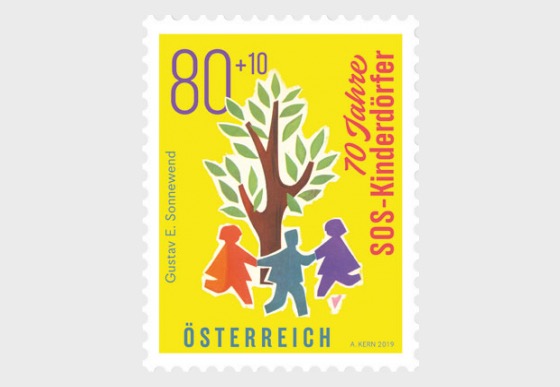 About 70 Years of SOS Children's Villages

“A symbol that has conquered the world”*

The SOS Children's Villages logo is probably the best-recognised symbol in the world ever to have been created by an Austrian designer.

On 25th April 1949, a group of committed people with Hermann Gmeiner at their centrefounded the “Societas Socialis” in Innsbruck, the first stage in the development of SOSChildren's Villages. Promoting the – for its time highly revolutionary – idea of raising orphaned children in a family-like environment, they countered the anonymous placement of children in children's homes with a completely new argument: children should grow up inthe safety and security of a family. Nowadays SOS Children’s Villages’ humanitarianapproach has spread across 135 different countries, religions and societies. What startedwith the building of the first SOS Children's Village in Imst as a “village for 70 children” hasnow become an international organisation caring for 600,000 children, young people and families in need around the world.

The stamp is a stamp with a supplement and shows the front cover of the SOS Children's Villages calendar from the year 1959, a picturesque version of the organisation's logo. The graphic language of the logo is universal: children playing, with a small tree between the boy and the girl representing the growth of an idea. In the stamp's design three childrenare dancing around this very tree, as if playing the children's nursery rhyme game “Ring-a-ring o’ roses...” (melody: folk song; German text from “Des Knaben Wunderhorn”, 1808; firstprinted in English in Kate Greenaway's “Mother Goose”, 1881). The 10 cent supplement goesto help SOS Children's Villages.

Originally used as the company logo for the SOS Children’s Villages Press, the logo wascreated in a competition held in 1949. Gmeiner, who personally selected the design and advocated using it exactly as it was, was won over by the design by the Tyrolean graphic artist Gustav E. Sonnewend (1927–2017). The logo has also taken its place in the history of mountaineering, as it was used on a flag planted to flutter in the wind on Mount Everest by an Austrian expedition to the Himalayas in 1978. In 1994 Sonnewend was awarded the Golden Medal of Honour by SOS Children's Villages for the “design and transfer withoutcharge of the now world-famous figurative mark”.