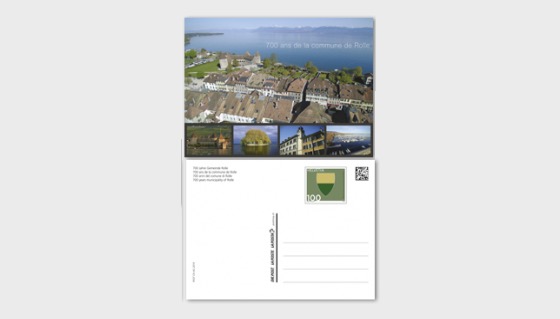 The municipality of Rolle, which lies between Lausanne and Nyon on Lake Geneva, is celebrating its 700th anniversary in 2019. The postal card created to mark this occasion shows an aerial photo of the municipality, the “Ile de la Harpe”, the port and Rolle Castle.

The rst traces of settlement date back to Roman times, and the place was rst mentioned in 1294 under the name of Castrum Rotuli. The town of Rolle was ac- tually founded beside the existing castle in 1319, under Ludwig II of Savoy. After the conquest of Vaud by Berne in 1536, Rolle came under the administration of the protectorate of Morges. During the Helvetic Republic, it belonged to the Canton of Léman, from which the modern-day Canton of Vaud later emerged. The village has preserved its historic center, which dates back to the Middle Ages.

Rolle Castle, built in 1264 by the Count of Savoy, was burnt down by the Swiss confederates in 1530 and 1536. Most of the current building comes from renova- tions and new constructions in the 15th and 16th centuries. In addition to its tourist attractions, Rolle has also become a popular place to live due to its charming setting. As part of the “La Côte” winegrowing region, it is well known for its wines.