Michelangelo Merisi aka Caravaggio – David with the Head of Goliath - Set 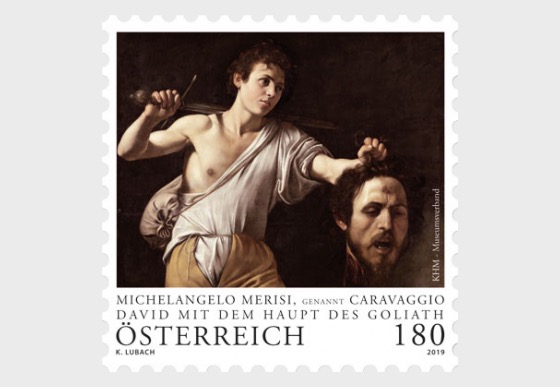 Michelangelo Merisi aka Caravaggio – David with the Head of Goliath - Set for only GBP £1.64

About Michelangelo Merisi aka Caravaggio – David with the Head of Goliath

This year’s engraved stamp from the “Old masters” series shows a painting by the earlyBaroque Italian artist Michelangelo Merisi, also known as Caravaggio, depicting a scene from the bible story of David and Goliath.

In the first book of Samuel in the Old Testament, the story of David, a young shepherd boy, is told. Using only his catapult, he succeeded in killing the giant Goliath and cutting off his head. David subsequently became the king of the Israelites, and in the New Testament Jesus is described as a descendant of David.

The figure of David has inspired many artists. One of the most famous representations is the sculpture by Michelangelo Buonarotti showing the young man before the battle with his catapult resting against his shoulder. By contrast, the painting by Caravaggio shows the triumphant David holding up the severed head of his vanquished opponent. The woundinflicted by the stone is clearly visible on Goliath’s forehead. David has shoulderedGoliath's sword and his gaze is directed towards someone to the right, outside the picture, to whom he is presenting Goliath's head as a trophy. The heroic boy appears significantly smaller than the giant, yet confident and fearless. His figure is depicted in strong light and dark colours and occupies the largest area in the painting.

Caravaggio executed his work in 1606/07 on a poplar wood panel, painting over an earlier work on it. Today the work of art can be seen in the Portrait Gallery of the Kunsthistorisches Museum in Vienna. Another painting by Caravaggio featuring the same subject is on display in the Villa Borghese in Rome.

Michelangelo Merisi (1571–1610), also known as “Caravaggio” after his parents’ home town,led an adventurous life. In Rome he moved in aristocratic circles, whose members also provided him with commissions for works of art for churches. However, he was banished from the city after a violent brawl. He fled, first to Naples and later to Malta and Sicily. Hedied at the young age of 38, shortly before receiving a pardon. Caravaggio’s works impresswith their striking use of chairoscuro (tenebrism) as well as through their naturalism and dramatic composition.