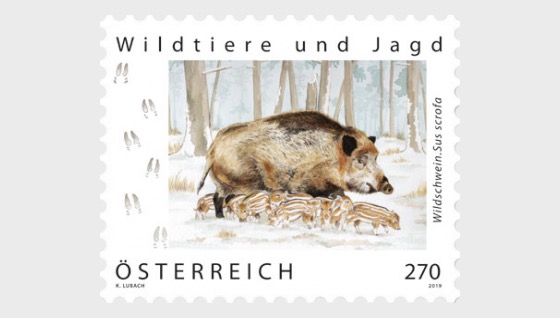 To fail to include this forest dweller in the series “Wild animals and hunting” would beunthinkable. An engraved stamp shows the impressive animal and its tracks around thestamp’s border.

The wild boar (Sus scrofa) belongs to the true pig family. It is also the ancestor of our domestic pig, but, unlike the latter, has a dark bristly coat. It originated in Europe, Asia and North Africa, but over time has become indigenous to other continents.

Wild boars are highly adaptable animals. In our latitudes they are mainly found in deciduous and mixed forests, where there are large quantities of oaks and beech, since it is the fruits of these trees, alongside herbs, fungi and roots, which comprise the bulk of their diet. However, as omnivores, they also eat snails, worms and carrion. In their search for fruits, grain and tasty roots they often lay entire fields waste and consequently cause considerable damage to agriculture. On the other hand, as they rummage they loosen the forest floor, thereby also ensuring the regeneration of the forest.

Wild boars are also outstanding swimmers. In principle they are timid, nocturnal animals, but they will defend their young aggressively against any supposed predator. The image of the magnificent wild boar draws the now to be retired series “Wild animals and hunting” toa close.

Adult male wild boars, the boars, are generally solitary animals. During the mating season, from October to March, known in hunting language as the “rut”, they come together withthe females, the sows. This period frequently results in violent battles between competing males, which often come to a bloody end thanks to the long curved canines of the boars, known as their tusks. The wild boar piglets with their characteristic striped coats are born a mere four months later. Wild boars live in sounders. These are family groups comprising amatriarch and her female descendants from the previous year, as well as this year’s piglets.Adolescent males are driven out of these groups after their first year. Wild boars can live to an age of 20; however, only a few animals ever reach an advanced age.