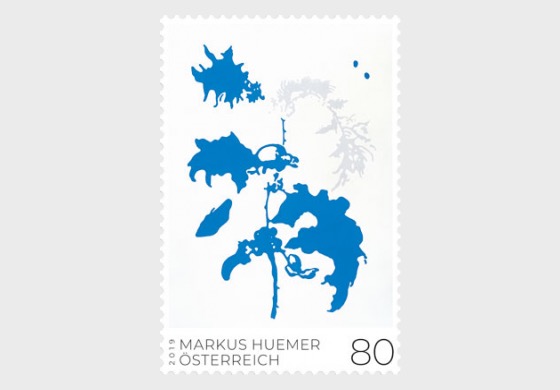 Markus Huemer - Many Colourful Trojans and Acorn-Shaped Worms - Set for only GBP £0.71

About Markus Huemer - Many Colourful Trojans and Acorn-Shaped Worms

This year’s stamp from the “Modern art in Austria” series shows a work by the UpperAustrian artist Markus Huemer, the title of which is a reference to the virtual world of the Internet.

Born in Linz in 1968, today Markus Huemer lives and works in Berlin. He creates drawings and paintings as well as interactive installations and computer animations. In his artistic process he uses only the colours white, black, grey and blue. The colour blue alludes to the blue box, a chroma key process in film and television technology, whilst grey refers to the medieval painting technique grisaille, which is based on the shading effects of grey, black and white areas. It is not only the colours but also the shapes that are drastically reduced in Huemer's works. What at first appear to be recognisable physical forms in his works are soon revealed to be deceptive. When one looks again, one realises that the modelling of light and shade and the three-dimensionality correspond to the visual logic of digital image processing.

The shape of the image which has been used for the special stamp is reminiscent of a plant.The artist’s floral paintings are based on the copper engravings by the naturalist Maria Sibylla Merian, which he processes digitally and then reproduces on canvas in a stylised form. This throws the boundaries between reality and the virtual world into question, creates different realities and parallel worlds and explores how they are perceived. Just as the naturalist illustrated previously unknown flora and fauna, Markus Huemer attempts torepresent, with a degree of irony, the world of the Internet and its virtual “beings” such asTrojans, viruses, add-ons, cookies and much more in his works, as is reflected in their rather scientific sounding titles.

The oil painting, measuring 2.40 by 1.80 metres, from the year 2005 with the full title of“Many Colourful Trojans and Acorn-Shaped Worms on Software-Updates” is owned by the “Leinemann Foundation” art collection, Berlin and Hamburg.