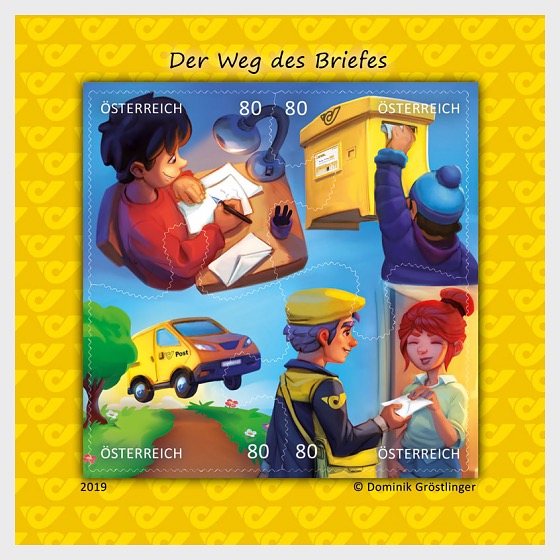 A Letter’s Journey - Miniature Sheet for only GBP £2.81

About A Letter’s Journey

A message on paper

Letters connect people. But by the time a letter reaches the recipient, it has always followed a specific path. The aim of this comic stamp block in the form of a puzzle is to make children more aware of that journey.

The German word for letter, Brief, is derived from the Latin brevis libellus, which later became breve (a short piece of writing) and brevis (short, brief). During the 12th century this developed into the sentbrief with the meaning it still has today. Letters, as a means of conveying a written message to a recipient, have existed for as long as we have had a written culture and since paper was invented as a medium. The earliest culture of letter writing is found in Ancient Egypt, as they were already making papyrus there in the 3rdcentury B.C. In earlier centuries the personal messages contained in a letter were usually transported by messengers on foot or on horseback and later also by mail coaches. Even today, the journey undertaken by a letter is determined by the distance between the sender and the recipient, regardless of the fact that technical advances have completely changed the way letters are transported.

It was in the 18th century, sometimes also referred to as the century of letter writing, that the writing of letters became more widespread, albeit only among the educated upper classes. By the 20th century, however, most people were able to write letters, and now, in the 21st century, our aim is to rediscover this form of communication in order to counter the fast pace of digital life with something more lasting. The boy on the illustrated block of stamps is showing us the way. He has something deeply personal to say; he is smiling as he writes and is enjoying filling the paper with his thoughts line by line. Narration is always the foremost aspect of a letter.

The journey undertaken by a letter was and still is a logistical challenge, because on its way from the sender to the recipient it has to go through various stages in a specific order. The comic stamp block shows these stages in a manner accessible to children. Nowadays protecting the environment is also extremely important in logistics. That is why, as part of its climate protection initiative, Austrian Post makes all of its deliveries throughout the country CO2 neutral. This makes it a pioneer in the field of “green logistics” at internationallevel too.