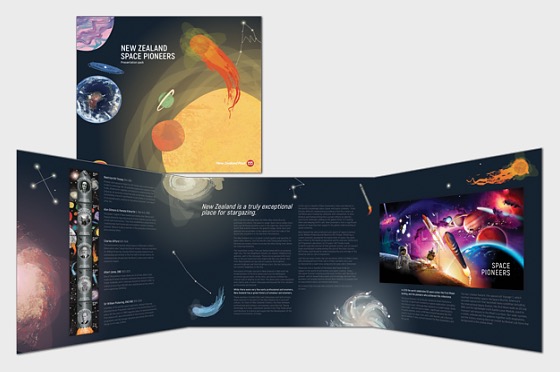 Immersed in a clear, unpolluted southern sky, from New Zealand we have more stars and galaxies accessible to the naked eye than in most parts of the Northern Hemisphere. It is not surprising then that for most of New Zealand’s history, the lines between professional and amateur astronomers have been blurred. It is in this spirit that New Zealanders have helped to advance the world’s knowledge about space and space sciences.

These fun stamps celebrate six of New Zealand's astronomers, cosmologists, discoverers and rocket scientists. They have been topped off with a sprinkling of crushed meteorite and together form a rocket ship shape in a se-tenant strip.

$2.40 Charles Gifford - Charles Gifford was New Zealand’s most outstanding astronomer in the first half of the 20th century. Using mathematics, he showed that the Moon’s craters were made by meteorite impact.

$3.00 Albert Jones, OBE - Albert Jones made more visual brightness estimates than anyone in history. With a telescope he built in 1948, he looked at more than 500,000 stars, and discovered two comets and a supernova.

$3.60 William Pickering, ONZ KBE - Pioneer of world’s space exploration, William Pickering launched America’s first spacecraft. He was instrumental in the success of the Apollo programme and the Voyager missions and retired to see Viking 1 on its way to Mars. Mount Pickering Summit, in Fiordland, was named in his honour.