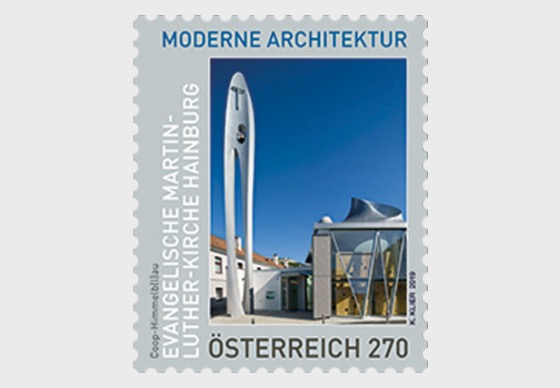 Extraordinary and Impossible to Miss

This special stamp from the series “Modern architecture in Austria” is dedicated to one ofAustria's most spectacular churches from the architectural point of view: the Martin Luther Protestant Church in Hainburg an der Donau.

It took less than a year to construct the sacred Protestant building right at the heart of the old town in the Lower Austrian town of Hainburg an der Donau. It was consecrated on 30thApril 2011, exactly 1,700 years after the Edict of Tolerance was issued by Emperor Galerius in 311, marking the end of the persecution of Christians. The impressive church building has already been honoured with many architectural prizes.

The church was designed by the well-known architect Wolf Dieter Prix of Coop Himmelb(l)au, who is himself a child of Hainburg. The building complex comprises a church, a community hall, a block containing offices and utility rooms and a 20-metre-tall bell tower.

The Church as a Light Space

Whilst the bell tower in the forecourt is slightly reminiscent of a tuning fork, the design of the church itself resembles a table: the steel roof construction sits on the four reinforced concrete pillars like a tabletop on the table’s legs. The shimmering silver roof has threecurved openings to let in light, symbolising the holy trinity as well as ensuring that plenty of daylight penetrates into the interior. The curves of these openings are based on the shape of the Roman ossuary of the former church of St. Martin in Hainburg. The self-supporting steel roof was made at a shipyard on the Baltic Sea and then lifted onto the building. Prix's inspiration for the design of the building was the French architect Le Corbusier, who was considered the master of light.

Another exceptional feature is the wooden altar-piece bearing a carved wooden cross which stands in front of the jagged glass façade. The altar and the chancel are on one level. The sanctuary is set directly to the street, so the perforated wooden wall offers both protection against being looked in on and a view into the church. The various parts of the complex can be combined and used as a venue for concerts and readings.