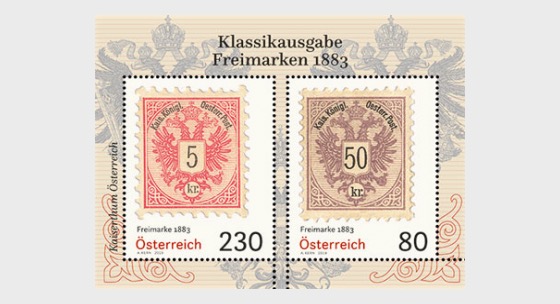 This time the stamp block from the “Classic Edition” series shows a 5 Kreuzer and a 50 Kreuzer postage stamp from the year 1883 with the double-headed eagle in the background.

The 1883 stamp series was special: this was the first time that a series of stamps was issued exclusively for Austria, as, following the Austro-Hungarian Compromise in 1867, the Hungarian post office now issued its own stamps. Identical stamps but with a denomination in Soldi were, however, still used by the Austrian Post in the Levant, with the curvedinscription reading “Imper. reg. posta austr.”

The new stamps show the double-headed eagle printed in colour on a light-colouredbackground. For the first time, the inscription “Kais. Königl. Oesterr. Post”, the pertinentdenomination and the currency Kreuzer, abbreviated as kr., were added in black in a second printing process. The value is placed in the double-headed eagle’s shield, thecurrency in a light field below this and the inscription cited above in an arc over the eagle’shead.

For printing, the same paper as for the previous issue with the water mark “BRIEF-MARKEN” was used. However, by the last print run in 1890 supplies of this paper had beenexhausted and it was replaced by the paper used for newspaper stamps with thewatermark “ZEITUNGS-MARKEN”. The gum was the same as for the 1867 issue.

There are various perforation types for the 1883 stamp series. Originally having harrow perforations of 9 1⁄2, from 1887 this changed to 10. What is more, an inadequately repaired perforating machine resulted in irregular perforations, with the number of perforations on the sides varying. Stamps with the less common line perforation (which is not available for 50 Kreuzer stamps) have a correspondingly higher value.