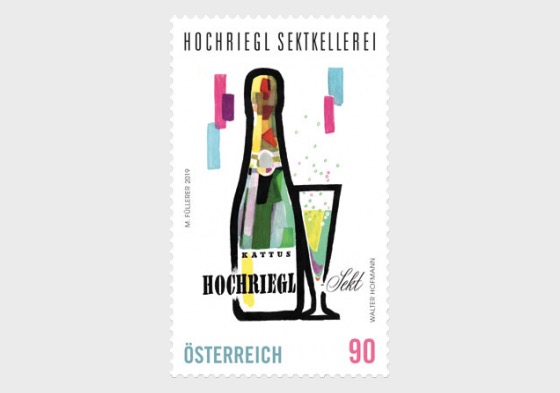 Almost 130 years of sparkling indulgence – this year’s stamp from the “Classicaltrademarks” series is dedicated to a traditional Viennese company: the Hochriegl sparklingwine cellar.

The Viennese family-run company Kattus founded the Hochriegl sparkling wine cellar in 1890. This was a cultural golden age for Vienna, with extravagant balls and receptions at court and in the homes of the nobility and the bourgeoisie offering plentiful opportunities to enjoy epicurean treats of every kind. The good quality of the sparkling wine resulted in the company, headquartered in Vienna's Döbling district, quickly being appointed supplier to the court.

The name Hochriegl is taken from a vineyard outside Vienna's gates, but nowadays it is associated with the classic Viennese sparkling wine, which impresses with its fine quality and symbolises pleasure and love of life. In 2009 Hochriegl was sold to the Schlumberger sparkling wine cellar, but the name was retained and the range is being continuously developed. Despite the reintroduction of the sparkling wine tax in 2014, Hochriegl remains economically viable.

The design on the stamp was taken from a poster by the Austrian graphic designer and illustrator Walter Hofmann from the year 1958. Hofmann's advertisements, with their clear style, were a characteristic feature of Austrian streets throughout the 1950s and 60s. His designs included posters advertising tourism in Austria and brands such as Nivea and PEZ.

Even today, there is a tendency to associate sparkling wine with luxury, not so much because it is expensive but because it is traditionally drunk on special occasions. That makes it an exclusive pleasure to be enjoyed when celebrating. Innovative new varieties and an attractive design lend it a contemporary feel and an air of joie de vivre.

Since 2011 the many high quality varieties, such as the rosé, the aromatic Ti Amo or the classic Hochriegl Trocken, have been supplemented by innovative Frizzante creations, which appeal to new target groups. Frizzante has a lower alcohol content and contains less carbon dioxide, and it is not subject to the tax on sparkling wines. Fruity flavours such as elderberry, grapefruit or berry make it a popular drink for the summer.