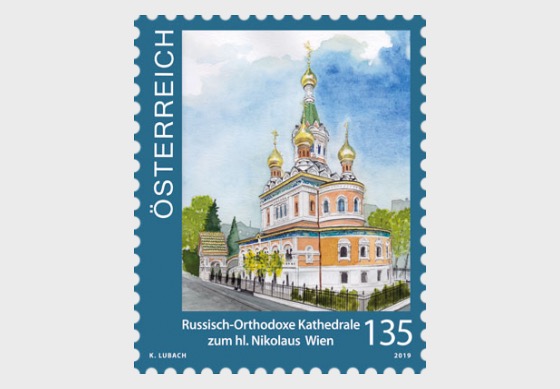 A Church with a History

This year's stamp from the “Churches in Austria” series shows the impressive and opulentRussian Orthodox Cathedral of St. Nicholas in Vienna's Landstraße district.

The late historic era brick building in the Russian Late Byzantine style was built between 1893 and 1899 to plans by the St. Petersburg architect Grigorii Ivanovich Kotov under the management of Cavaliere Luigi Giacomelli. Tsar Alexander III personally covered some of the costs of the building work. The patron saint of the upper church is St. Nicholas of Myra; that of the lower church, the saint Grand Prince Alexander Nevsky. Today the church is situated right next door to the Russian embassy.

At the start of the First World War the church was closed and used for secular purposes; it was only after the end of the Second World War that it reopened for worshippers. The church, which was elevated to the status of a cathedral in 1962, is the episcopal seat of the Russian Orthodox community of Vienna and Austria and is a diocese of the Patriarchate of Moscow. Today there are around 40,000 members of the Russian Orthodox faith living in Austria.

Characteristic golden onion domes adorn the cupolas of the two-storey church. Above the main dome towers a five-metre-high cross decorated with crystal prisms. The red walls are decorated with coloured enamelled and glazed tiles and colourful tiles also adorn the ceiling.

Since a comprehensive renovation was undertaken, completed in 2008, the interior of the church has been decorated with valuable and richly coloured wall frescos by the famous iconographer Archimandrite Zenon. At the centre of the upper church stands a two-tier gilt iconostasis carved from cypress wood. Valuable traditional icons and multiple golden chandeliers adorn the opulent space. The lower church is decorated in a simpler style and houses a font and a marble iconostasis, among other things. The cathedral's valuablecollection of relics includes a splinter from Christ’s cross, relics of the apostles Peter andPaul and of the church's patron saint, St. Nicholas.