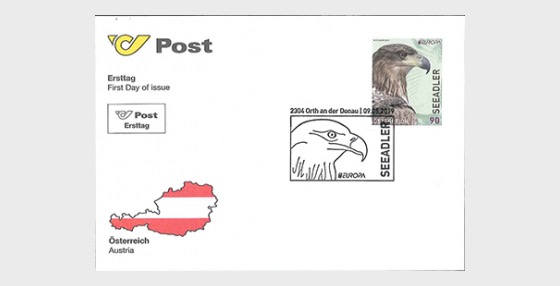 The topic for the 2019 EUROPA stamp is “national birds”. The Austrian edition of theEUROPA stamp shows a white-tailed eagle, which also forms part of the coat of arms of Austria.

With a wingspan of over two metres, the white-tailed eagle (Haliaeetus albicilla) is one of the biggest birds of prey in Europe. It had been wiped out in Austria since the mid-20th century, but in recent years has been successfully reintroduced in the east of the country, including in the Danube-Auen National Park. It has nonetheless been added to Austria’s “red list” as at risk of extinction.

The greyish-brown white-tailed eagle is distinguished from the golden eagle and the imperial eagle by its characteristic featherless, yellow legs and its yellow beak. The special stamp shows a young bird, the colour of the beak still not fully developed. Particularly noteworthy is the short white retrice, as the tail feathers are called. In flight, the white- tailed eagle can also be recognised by its broad, deeply fingered wings.

White-tailed eagles build mighty eyries for their brood, which are used all year round. In order to hunt they need to be near bodies of water, from which they catch fish and water birds. They will not turn their noses up at eels either, which puts them at particular risk due to illegal poisoned bait and hunting ammunition containing lead. Traps, the destruction of their habitat and collisions with vehicles or power lines also constitute significant dangers.

The European postal operators first issued a EUROPA stamp in 1956. Since 1993 PostEurop, the association of European public postal operators, has coordinated theannual editions, which since that time have born the official inscription “EUROPA”. Aworking group selects the topics for the forthcoming EUROPA stamps every two years, and these are then implemented in the individual countries.

The EUROPA stamps stress the collaboration between the participating postal operators, both in conveying the post and in promoting philately. They are also intended to raise awareness of the shared aspects of the countries’ culture and history as well as of ourcommon aims.