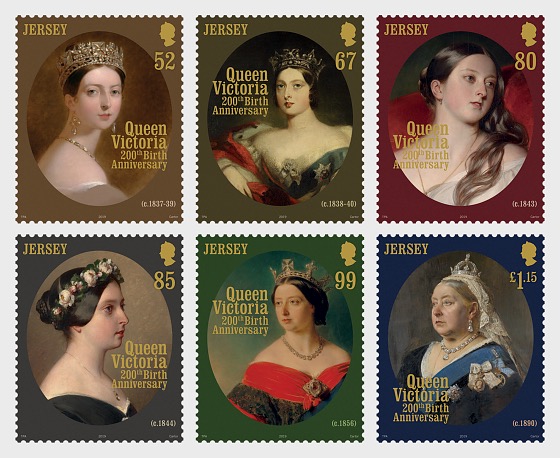 Victoria, daughter of Edward, Duke of Kent and Victoria of Saxe-Coburg-Saalfeld, was born at Kensington Palace on 24th May 1819. She became Queen of England at the age of 18, succeeding her uncle, King William IV on 20th June, 1837; the Coronation took place a year later on 28th June. Queen Victoria, accompanied by Prince Albert, first visited Jersey in September 1846, arriving on the Royal Yacht Victoria & Albert. The couple were greeted by a crowd of approximately 50,000 Islanders. Extraordinary quantities of flowers were used in town decorations and at the harbour reception, and more than twenty decorative arches covered with foliage, flags and emblems of royalty were erected along the route to be taken by the Royal Party. It was a similar scene in August 1859, when Queen Victoria and Prince Albert visited Jersey for the second time and extracts from her journals, in which she wrote about “the sea, which was beautifully blue and calm… lovely valleys… with wooded hills and banks above meadows”, evidenced her fondness for the Island. Today, in Jersey, a statue of Queen Victoria overlooks the bay of St. Aubin in the south of the island and, indicative of the affection of the people of Jersey, her name has been given to many Jersey sites, such as Victoria College, Victoria Avenue, Victoria Harbour, and Victoria Cottages. Six stamps commemorate the 200thanniversary of Queen Victoria’s birth, featuring portraits depicting Queen Victoria at key stages of her life. The Miniature Sheet features a portrait of Queen Victoria (1844-1845) by Franz Xaver Winterhalter, a copy of which hangs in the great hall at Victoria College, Jersey.