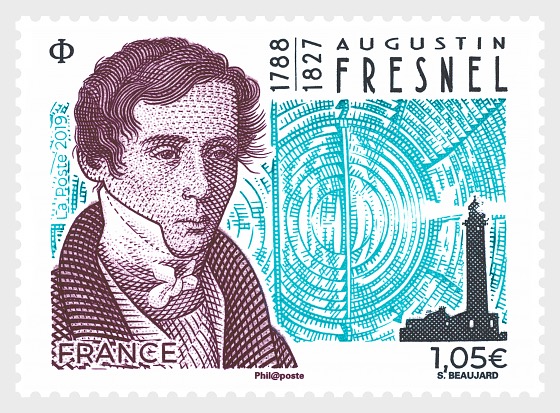 Nothing destined Augustin Fresnel to become the father of modern optics. Born May 10, 1788 in a family of the Norman bourgeoisie, cousin of the writer Prosper Mérimée, the young Augustin excelled in mathematics and entered the École polytechnique at only sixteen years old. He comes out of it engineer and integrates the Bridges and Roads, undoubtedly to satisfy his father who exercises the profession of architect. But building roads in the Vendée and in the Drome is boring. To amuse himself, he devotes himself to optics and works on light. In 1819 he broke Newton's theory that light was a matter moving in a straight line. For Fresnel, mathematical calculation and physical demonstration, light is a vibratory wave. Augustin Fresnel then worked to design a more efficient headlight lighting system by inventing in 1822 a step lens, which now bears his name, assembling lenses of different sizes and inclinations to better focus the light and increase it. the power. Thanks to him, the light of the headlights is three to five times farther than before. Obviously, Fresnel lenses are soon to equip the lighthouses of France and the world. Elected to the Academy of Sciences in 1823, the formidable engineer died prematurely of tuberculosis, on July 14, 1827. François Arago, who was his friend, celebrated at his death "the man of genius". In fact, in our twenty-first century, in addition to certain mathematical formulas of his invention - the Fresnel integrals - his famous lenses are always used: cinema projectors and video projectors, headlights, magnifiers, mirrors reducing the blind spot, or lenses of crates. supermarkets reading barcodes. Almost two hundred years after his death, Augustin Fresnel is still part of our daily lives.