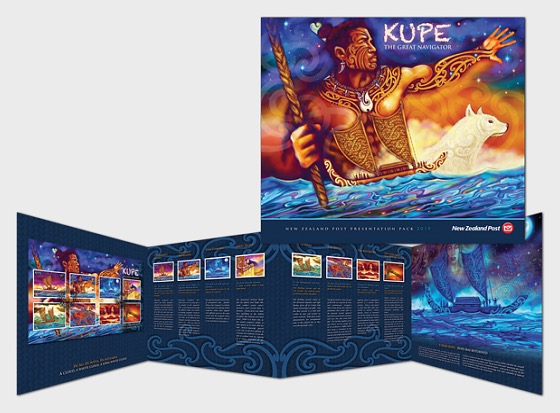 Throughout the Pacific region, Kupe is the navigator credited with bringing the knowledge and data back to the Pacific that enabled the eventual population of Aotearoa. This issue explores the adventurous legend of Kupe’s pursuit of a great octopus, and the ways of Polynesian navigators who used the sky and ocean to guide their journeys between the islands of the Pacific.

Polynesian navigators have a special place in the world of Māori, the indigenous peoples of Aotearoa New Zealand. Stories abound about the navigators of the vast Pacific Ocean, with the most important and famous of them all being Kupe - for it is he who led the way for others to follow.

It is Kupe who is credited with the discovery of Aotearoa, and who returned to the Pacific carrying navigational knowledge about the vast new land to the south.

Kupe’s wife, Hine-te-Aparangi, was the first to sight the vast land mass that we call Aotearoa. “He ao - a cloud!” she called, then “He aotea - a white cloud!” and finally “He aotearoa - a long white cloud!”

The story of Kupe’s epic journey has been handed down through time via the oral traditions of Māori. While there are tribal differences about the story’s finer details, there are also agreed facts that support Kupe’s existence and validate the navigational intelligence and data that he took back to the Pacific. The Kupe legend is indicative of Polynesian fables, which helped in transmitting tribal knowledge and histories through generations.

Kupe’s journey began in Hawaiki, which Māori speak of as ‘Hawaiki nui, Hawaiki roa, Hawaiki pāmamao’, which means the great Hawaiki, the long Hawaiki, the distant Hawaiki. Māori regard Hawaiki as their spiritual and ancient homeland, as it is from there that the original Māori migration canoes travelled to Aotearoa New Zealand, guided by Kupe’s navigational intelligence.

This stamp collection celebrates Kupe the person and Kupe the legend. It depicts people, places and aspects of Polynesian navigation attributed to and associated with him. It also recognises his contribution to the whakapapa (history) of Aotearoa New Zealand and honours his position as one of our greatest navigators.

Luke Mikaire Crawford is the kaumatua to the Māori All Blacks and New Zealand Rugby. He has worked closely with graphic designer Dave Burke to produce Māori sports apparel associated with the Māori team. This has developed Luke’s keen interest in and passion for sharing the beauty of authentic Māori stories with the world. In this presentation pack, Luke connects the stories of Kupe the legend and Kupe the great navigator, delving into the navigation techniques of Pacific wayfinders that are still used by mariners today.