Admont Abbey Museum - Angel from the “Baptism of Christ” - Set 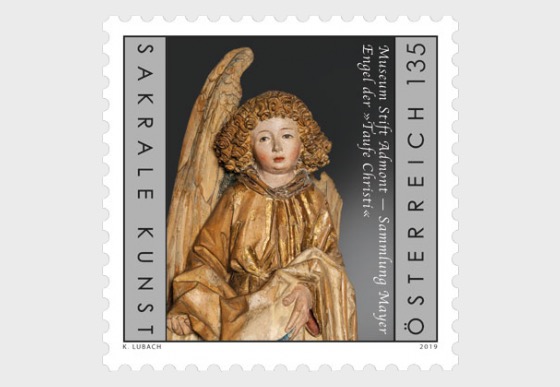 Admont Abbey Museum - Angel from the “Baptism of Christ” - Set for only GBP £1.19

About Admont Abbey Museum - Angel from the “Baptism of Christ”

Art from the Middle Ages
The design on this year’s engraved stamp from the “Sacred Art” series shows the angel from the “Baptism of Christ”. The relief is part of the Mayer Collection in the Gothic Museum of Admont Abbeyin Styria.

The permanent exhibition “Close to Heaven – Art from the Middle Ages” presents 85 exhibits datingfrom the late 14th to the early 16th centuries from the collection of Kuno and Helga Mayer from Vorarlberg. The selection of Late Gothic masterpieces provides an insight into this important period in art history, which has had a lasting influence on our culture. The predominantly sacred sculptures,reliefs and painted panels have found a fitting home in the historic “Pillared Hall” of Admont Abbey,where the exquisite works of art are shown to particularly good effect. The theme of the “Beautiful Madonna” from the period around 1400 is represented, as are works by Niklaus Weckmann fromUlm and the South Tyrolean master sculptor Hans Klocker of Brixen. Kuno Mayer was rewarded for his commitment to protecting and preserving our Gothic cultural heritage by Pope Francis, who conferred on him the Order of St. Sylvester.

The Gothic Museum is only one of the museums housed in the Benedictine Admont Abbey, where, as well as the Late Baroque Abbey Library, you will also find a Natural History Museum, a Museum of Fine Arts and a Museum of Contemporary Art. A temporary exhibition on the art of the Middle Agesis to be staged right next door to the Gothic Museum, and the exhibition “We Frederick III & Maximilian I” is also planned for 2020.

The Charming Angel
The sculpture of the angel used in the stamp’s design is a detail taken from a relief entitled “The Baptism of Christ”, which is ascribed to someone working in the studio of the sculptor Hans Klockerof Brixen. The high-relief dates from around 1500 and was carved in pine. It shows Christ in a standing position being baptised by John the Baptist in the waters of the River Jordan. The angel on the right-hand side of the artwork is holding Christ's tunic, tightly folded, over its arm. The curly-haired angel’s face is eye-catching with its soft, round form. The relief was probably originally part of a St. John altarpiece.