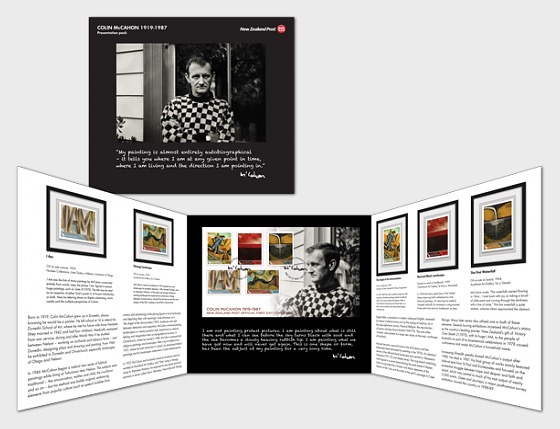 Born in 1919‚ Colin McCahon grew up in Dunedin‚ always knowing he would be a painter. The distinctive power and originality of his images would make McCahon a giant of New Zealand painting, and today he is recognised internationally as one of Aotearoa’s most significant artists.

All images courtesy of the Colin McCahon Research and Publication Trust.

Colin McCahon was born in Timaru but spent most of his life in Auckland where he worked at the Auckland Art Gallery and taught at the Elam School of Art. McCahon began as a landscape painter, forming from this a visionary style featuring the placement of religious images and words against New Zealand backdrops. This issue features five of his well-recognised works.

$1.30 I Am - Oil on jute canvas, 1954. I Am was the first of many paintings by McCahon constructed entirely from words. Here his lettering draws on display advertising, movie credits and the multiple perspectives of Cubism.

$1.30 Titirangi Landscape - Oil on canvas, 1954. In this joyful and strongly rhythmical evening landscape McCahon explores the connections in shape between circular bouncy clouds lit by the late sun and the curvy shapes of the hills.

$2.60 The Angel of the Annunciation - Oil on cardboard ‚ 1947. In 1947-1948 McCahon startled audiences with radically unfamiliar paintings based on biblical stories. McCahon placed the figures within a local landscape and treated them in style that proved highly controversial.

$3.30 Red and Black Landscape - Enamel on sand on hardboard, 1959. In 1958 McCahon spent time in the United States observing both contemporary and historical paintings. On returning his method changed radically, here using enamel house paint and sand on hardboard.

$4.00 The First Waterfall - Oil on jute on board‚ 1964. McCahon wrote: “The waterfalls started flowing in 1964… I look back with joy on taking a brush of white paint and curving through the darkness with a line of white.”

Presentation pack
Learn more about Colin McCahon’s life from writer, editor and curator Peter Simpson. Peter has published several books on McCahon and curated several McCahon exhibitions. In 2017 Peter received the Prime Minister’s Award for Literary Achievement in Non-Fiction. In 2019 he will publish Colin McCahon: There Is Only One Direction: Volume One 1919-1959. A second volume, Colin McCahon: Is This The Promised Land?: Volume Two 1960-1987 will follow in 2020.