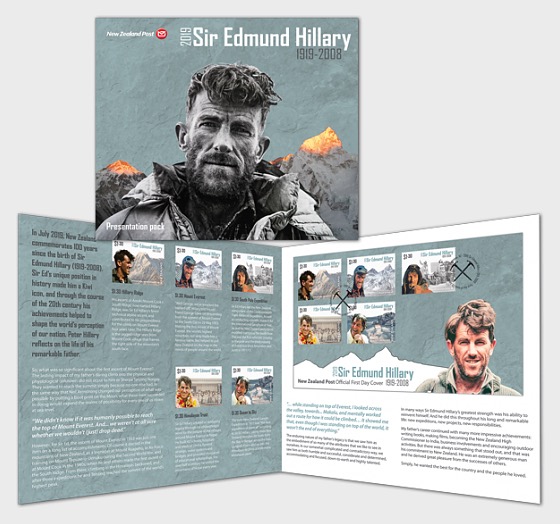 In 2019 New Zealand commemorates 100 years since the birth of Sir Edmund Hillary. These stamps celebrate key moments in the remarkable life of one of our greatest heroes.

The enduring nature of Sir Ed’s legacy is that we see him as the embodiment of so many of the attributes that we like to see in ourselves. In our somewhat complicated and contradictory way, we saw him as both humble and successful, considerate and determined, accommodating and focussed, down-to-earth and highly talented.

In many ways Sir Ed’s greatest strength was his ability to reinvent himself. And he did this throughout his long and remarkable life; new expeditions, new projects, new responsibilities. Sir Ed wrote books, made films and became the New Zealand High Commissioner to India. But there was always something that stood out, and that was his commitment to New Zealand. He was an extremely generous man, and he derived great pleasure from the successes of others. Simply, he wanted the best for the country and people he loved.

$1.30 South Pole Expedition
As well as leading the Ross Sea party in 1957/1958 and conducting scientific research for the International Geophysical Year, Sir Ed led the first vehicular crossing to the South Pole.

$1.30 Ocean to Sky, India
Led by Sir Ed, Indo-New Zealand Ganges Expedition in 1977 took three New Zealand Hamilton jet boats from the Bay of Bengal across the Gangetic Plains and ended with the ascent of a 6,000 metre Himalayan peak.

$1.30 Himalayan Trust
Over half a century, Sir Ed built 42 schools and hospitals, airstrips, water systems and bridges, and provided thousands of educational scholarships to the people of the villages around Mount Everest in Nepal.

$1.30 Mount Everest
Making the first ascent of the world’s highest mountain not only made Sir Edmund Hillary a famous name, but it helped to put New Zealand on the map in the minds of people around the world.

Presentation Pack
Find out more about Sir Ed’s legacy from the perspective of his son, Peter Hillary. The pack includes a first day cover and the full set of five stamps.

Individually-numbered souvenir stamp sheet
A unique product for your collection, these individually numbered stamp sheets feature a silver-foiled fern and are strictly limited to a run of 2,019.