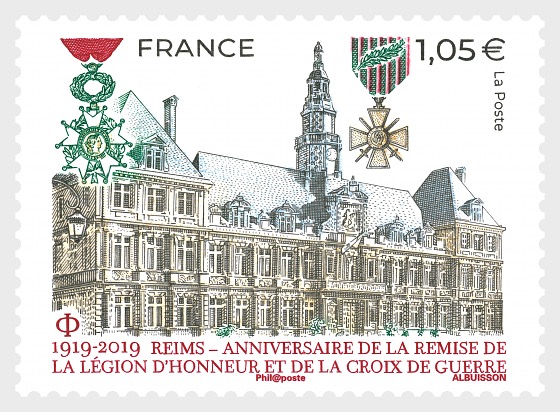 On July 6, 1919, "in the name of grateful France", the President of the Republic, Raymond Poincaré, solemnly hands the Legion of Honor and the Croix de Guerre to the city of Reims. The tribute is justified thus: "City Martyr who paid for its destruction the rage of an impotent enemy to stay there. Sublime people who have shown the most magnificent courage, staying for more than three years under the constant threat of the enemy's blows. With more than 70% of its homes destroyed, gas networks, running water, electricity and sewers to rebuild, the city is no more than a pile of ruins. In 1919, half of the inhabitants were crammed into wooden barracks built by the army, temporary dwellings that will last for years. If it is indeed a martyred city, it is that one. As proof, its magnificent cathedral, that of the coronations, bombed and set on fire on September 19, 1914. The town hall, in front of which Poincaré pronounces his speech, suffered the same fate, in May 1917. It is more than a carcass blackened and devastated. Populated with 115,000 inhabitants before the war, Reims lost three quarters of its fellow citizens. And yet, before being evacuated by the military authority in 1918, on the eve of the last great German offensive, its population was proudly under the bombings. The large cellars of the Champagne houses served as his refuge: dormitories, kitchens, schools, churches, and even the services of the town hall were installed there. From 1914 to 1918, the city of Reims was half underground! Both a heroine and a victim, a symbol of blind violence against civilians and a model of resistance and determination, the city of kings had deserved the country. Like her, twenty bruised cities will be decorated in the post-war period.