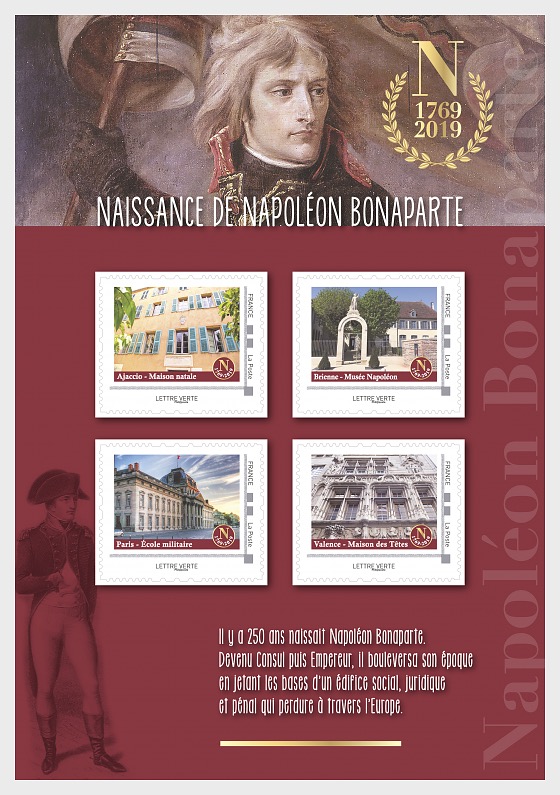 Napoléon - Collectibles for only GBP £4.50

Ajaccio: August 15, 1769: Napoleon Bonaparte was born in this family home, located at the corner of current streets Saint-Charles and Letizia. The Empress Eugenie and the Prince Imperial inaugurate the new facilities on the occasion of the centenary of the birth of Napoleon Bonaparte, in 1869. It has been transformed into a national museum since 1967.

Brienne: From May 1779 to October 1784, Napoleon Bonaparte is at the Royal Military School of Brienne. The education provided is both military and traditional. As provided by the regulations and because of his removal, the young Bonaparte is cut off from his family, which marks his personality permanently. Uprooted and isolated, he nevertheless passed his entrance exam in Paris.

Paris: The idea of ​​founding a military school for young gentlemen without fortune was born in the spring of 1750, at the instigation of the Marquise de Pompadour and the financier Pâris-Duverney. Bonaparte, then a fellow of the king, joined the school on October 30, 1784. He left the latter second in the artillery, provided with an assignment to the regiment of La Fere at Valence.

Valencia: The House of the Heads is located at 57 Grande Rue. The descendants regularly welcome a neighbor, the young lieutenant Bonaparte in training at the school of artillery of Valence from 1785 to 1786. In 1798, the latter will ask the printer Marc Aurel, whose mother acquired the House of Heads in 1794, to accompany him during the Egyptian campaign.