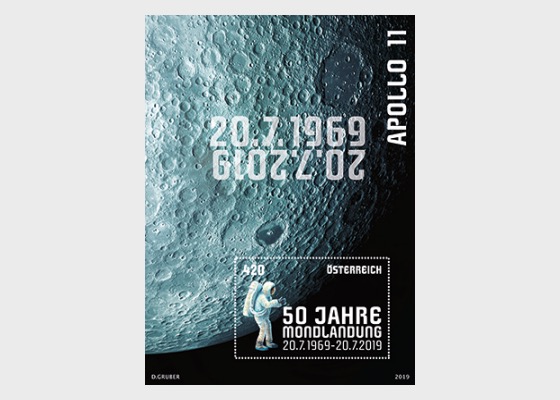 50th Anniversary of the First Moon Landing - Miniature Sheet for only GBP £3.82

About 50th Anniversary of the First Moon Landing

The literal “race to the moon” ended on 21st July 1969 when a man walked on the moon forthe first time. Austrian Post is dedicating a spectacular mini sheet with a “glow in the dark”effect to this significant event.

The battle for supremacy between the two superpowers the USA and the USSR began in the 1950s. In 1957 the Russians succeeded in sending the first satellite into space with Sputnik 1, shortly afterwards sending the first living being, the dog Laika, into space. In 1961, Yuri Gagarin was the first man in space. It was likewise a Soviet cosmonaut, Alexei Leonov, who was the first to venture outside a spaceship for a spacewalk, protected by only a space suit. However, when the race ended, it was the USA that came out in front: Apollo 8 was the first vessel to circumnavigate the moon and photograph the Earth rising above the moon's horizon in 1968. Further successful tests followed, meaning there was now nothing to prevent a landing on the moon.

A giant leap for mankind

On 16th July 1969, Neil Armstrong, Edwin “Buzz” Aldrin and Michael Collins set off in the command module Columbia as part of the Apollo 11 mission. While Collins remained in the Columbia, Armstrong and Aldrin continued on to the moon’s surface in the lunar moduleEagle. The “eagle” landed on the evening of the 20th July and on 21st July – although still the 20th July in US time – Neil Armstrong became the first man to set foot on the moon,speaking the legendary words: “That's one small step for a man, one giant leap for mankind.” This first step was watched in a live television transmission by millions of viewers around the world. The first visit to the moon lasted about two and a half hours, before the astronauts returned to Earth, where they were heralded as heroes. The moon landing and, in particular, the photographs of the Earth as seen from space changed our view of our planet for ever. It ushered in a new awareness, and the first environmental protection movements were founded. A further five moon landings followed, but man has not set foot on the Earth's satellite since 1972.

The glow in the dark effect on the commemorative stamp can be seen if it is first held up to the light and then viewed in a darkened room.