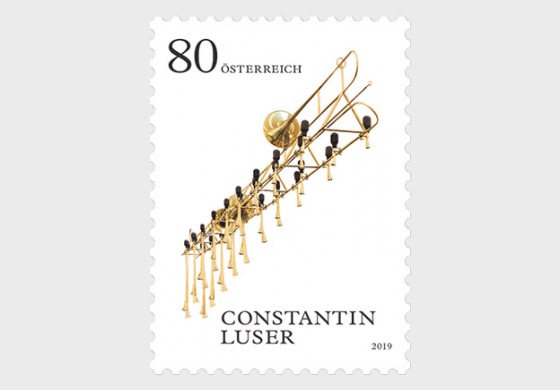 A work of art that is of particular relevance for Austrian Post is depicted on this year’s special stamp from the “Young art in Austria” series: “Stille Post” decorates the functionroom at the company's new headquarters in the Post am Rochus.

Optically, this striking work of art dating from 2017 has little to do with the traditional post horn as we know it, but in terms of the theme, it is a perfect fit for the headquarters of Austrian Post. In fact, the sculpture “Stille Post” is anything but “still” (silent): the eightmetre-long object suspended from the ceiling comprises brass pipes and excessively long French horn mouth pipes, on which 37 black horn bulbs are arranged like notes on a stave. The overly large musical instrument is completed by the mouthpieces from a trumpet, a trombone and a tuba, which invite the beholder to play it. By participating, the viewers can actively contribute to the work of art, thus becoming simultaneously part of the sound- emitting body and artists themselves.

Constantin Luser was born in 1976 in Graz. After studying industrial design at the FH Joanneum University of Applied Arts in Graz, he continued his studies at the Academy of Fine Arts and the University of Applied Arts in Vienna. His works have already been displayed in numerous international exhibitions, galleries and museums and he has also been featured in solo exhibitions in the Kunsthaus Graz and in the Kunsthalle Krems, among others.

From an early age the artist recorded his ideas and his life in drawings as if in a diary. Loose wire sculptures hanging from the ceiling followed as sort of three-dimensional drawings, constantly changing their appearance as a result of their movement and rotation around their own axis. Musical instruments play a significant role in Constantin Luser's art. Many of his works, such as the Trommeliglu, the Vibrosaurus, the Baum or the Rotationsquintett are made from musical instruments and invite the public to use them tomake music: “When somebody is active, they engage with the work on a whole new level. Itbecomes both a haptic and an acoustic experience.”