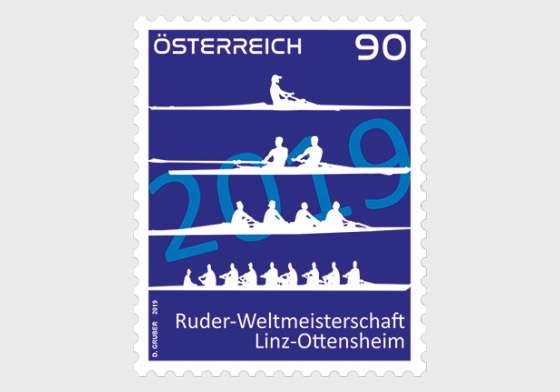 Rowing World Championships in Linz-Ottensheim - Set for only GBP £0.81

About Rowing World Championships in Linz-Ottensheim

Rowing on the Danube

From 25th August to 1st September 2019 the Rowing World Championships, one of the most important international events in the rowing calendar, will be held in Linz-Ottensheim for the first time – an event that Austrian Post is celebrating with a commemorative stamp.

The Upper Austrian market community of Ottensheim with its historic market place is not far from Linz and offers not only rowers and canoeists but also hikers and others seeking relaxation an idyllic landscape and many sport and leisure activities.

Linz-Ottensheim is one of the most popular regatta venues in the world, scoring points with its good wind conditions among other things. Major national and international rowing events have been held here for close to 50 years. For the Rowing World Championships in 2019 the infrastructure along the regatta course has been improved and a modern national sports centre for rowing and canoeing established. The World Championships has beendesigned as a “green event”. That is to say, particular attention is being paid to sustainableuse of the infrastructure, to regional and seasonal gastronomy, to a waste management concept and many other social and ecological measures.

The Rowing World Championships will be officially opened on 24th August with a comprehensive supporting programme based around the theme “Rhythm on Water”.Rhythm is extremely important in rowing, for which it is important to coordinate andchoreograph the team’s movements in a synchronous rhythm.

The race course for the World Championships will be a two-kilometre-long spur of the Danube, with around 1,400 sportsmen and women from 80 nations in around 500 boats expected to attend. In the races it is not just about winning World Championship medals but also places in the team for the 2020 Olympic Games in Tokyo. Events in various classes from singles up to coxed eights for men and women as well as para-rowing competitions will be held. Austrian athletes are among the medal hopefuls.