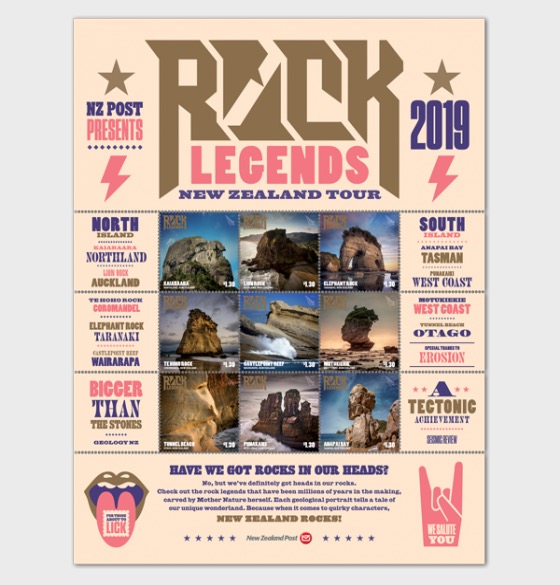 The Rock Legends stamp sheet delivers a tongue-in-cheek take on some of New Zealand’s quirkier rock formations, taking us on a tectonic tour of New Zealand’s head-shaped geological wonders. .

This rock is also affectionately named after its resemblance to ‘The Iron Duke’, the Duke of Wellington.

Not just a head, but a whole lion. Arguably our greatest rock legend, this volcanic beast rests undisturbed on the black sand beach at Piha.

Elephant Rock lost its glorious trunk a few years ago to the whims of Mother Nature. We commemorate this legend in 2019.

Guarding the famous Cathedral Cove, this majestic character is a familiar face to anybody who has visited this scenic wonderland.

Another rock portrait that stares out to sea. This legend tells of a giant wheke (octopus) that sought refuge here in a cave from the great Kupe.

This iconic sea-stack has become a must-see portrait at dusk. Not just a pretty face either, it’s also host to some of New Zealand’s rarest birdlife.

A colossal cliff face stares out to sea. Beyond the rugged beauty, this area is famous for the tunnel that was cut through to access the beach in 1870.

30 million years of pressure is starting to show on this face. These limestone ‘pancakes’ have created some interesting coastal characters.

This handsome fella stands watch over golden beaches. He’s sometimes referred to as ‘photographer’s rock’ due to him being so naturally photogenic.