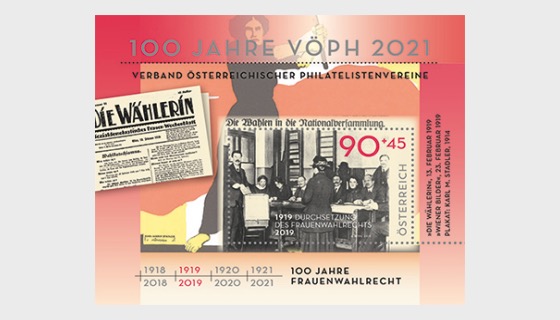 100 Years of Women's Suffrage in Austria - Miniature Sheet for only GBP £1.23

About 100 Years of Women's Suffrage in Austria

On this occasion, the focus of the series “100 years of the VÖPh (Federation of AustrianPhilately Associations)”, introduced in 2018, is the introduction of votes for women inAustria 100 years ago. This victory was preceded by a long battle for equal rights by women.

The path to suffrage

In 1848 an Austrian parliament was for the first time elected indirectly by the “people” viaelectors. However, only men were entitled to vote, and many of them were likewise excluded from the electorate. After the revolution of 1848/49, a very few privileged women were permitted to vote via an authorised proxy. The right to vote depended upon the level of education, income and ownership of property (curia and census suffrage). At the end of the 19th century women’s rights movements increasingly demanded suffrage for women, with the suffragettes led by Emmeline Pankhurst, fighting for women to be given the right to vote in England, providing a model for others to follow.

Universal suffrage for parliamentary elections was introduced for men in 1907, but women were still not accorded the right to vote. It was only when the First World War ended in the fall of the monarchy and the establishment of the Republic of Austria that universal suffrage – active and passive – for women was introduced on 12th November 1918 as part of the political new order.

The first election for women

The elections for the Constituent Assembly on 16th February 1919 were the first time that women were able to vote and stand for election. Eight women were elected to the national assembly: Anna Boschek, Emmy Freundlich, Adelheid Popp, Gabriele Proft, Therese Schlesinger, Amalie Seidel and Maria Tusch for the Social Democrat party and Hildegard Burjan, founder of Caritas Socialis, for the Christian Socialists party. Turnout among women was only slightly lower than that of men at these elections. From 1920 on, different coloured envelopes were used for men and women in order to be able to statistically analyse the voting behaviour of women.

On the mini sheet a poster by Karl Maria Stadler for Women's Day on 8th March 1914 can beseen in the background, along with an excerpt from the newspaper “Die Wählerin” and the title page of the “Wiener Bilder – illustriertes Familienblatt” on the elections of 16thFebruary 1919.