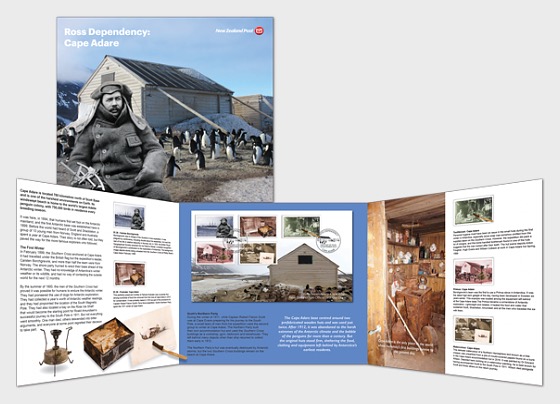 One of the harshest environments on Earth, Cape Adare is located 780km north of Scott Base. It was here, in 1894, that humans first set foot on the Antarctic mainland, and who in 1899 built the first Antarctic base.

Before the world had heard of Scott and Shackleton, a group of 10 young men from Norway, England and Australia spent a year at Cape Adare. They paved the way for the more famous explorers who followed, and the latest stamps from the Ross Dependency recount their rarely-told story.

The Cape Adare base centred around two prefabricated wooden huts and was used just twice. After 1912, it was abandoned for more than a century to the harsh extremes of the Antarctic climate and a babble of the penguins. But the original huts stood firm, sheltering the food, clothing and equipment left behind by Antarctica’s earliest residents. The latest Ross Dependency stamp issue tells the story of these huts through five key artefacts recently collected by the Antarctic Heritage Trust (AHT).

$1.30 Carsten Borchgrevink - Borchgrevink oversaw the Southern Cross expedition. Despite the expedition being plagued by controversy, in 1930, the British Royal Geographical Society awarded him its Patron’s Medal.

$1.30 Fruitcake: Cape Adare - This perfectly preserved Huntley & Palmers fruitcake was a surprise find among hundreds of food tins temporarily removed from the huts at Cape Adare.

$2.60 Toothbrush: Cape Adare - Although soap was somehow omitted from the supplies taken on the Southern Cross, this bone-handled toothbrush found in one of the huts suggests that the men did look after their teeth.

$3.30 Primus: Cape Adare - Borchgrevink’s team was the first to use a Primus stove in Antarctica. Lightweight and reliable, the Primus became a cornerstone of Antarctic exploration.

$4.00 Watercolour: Cape Adare - This delicate watercolour of a Northern Hemisphere bird known as a tree creeper was unearthed from a pile of mould-covered papers found on a bunk in the Cape Adare accommodation hut in 2016.

Presentation pack
In this presentation pack, you’ll learn more about the Southern Cross expedition that saw the first humans to set foot on the Antarctic mainland, Scott’s Northern Party and the Antarctic Heritage Trust’s efforts to preserve the huts and their artefacts. The pack includes a set of five stamps, a miniature sheet and a first day cover.