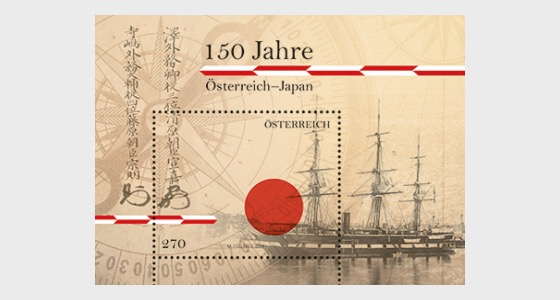 About 150 Years of Austria - Japan

This year Japan and Austria celebrate the anniversary of the assumption of diplomatic relations between the two countries 150 years ago. Austrian Post is celebrating this enduring collaboration with a beautiful mini sheet.

The path to a treaty

Under pressure from the USA, after centuries of isolation, the Japanese Empire finally began to cultivate relationships with other countries again in 1853. As one of the last countries, in 1868 an Austrian delegation led by Rear Admiral Anton von Petz travelled on the ships Donau and Erzherzog Friedrich from Trieste to eastern Asia in order to establish trading relations there. On 18th October 1869 a peace, trade and shipping treaty was finally entered into with Japan, coming into effect on 1st December 1871. Legend has it that the gift of a Bösendorf grand piano, on which Austrian classical music was played to the Japanese emperor, played a not insignificant part in bringing the negotiations to a satisfactory conclusion.

Japan was represented at the World Fair in Vienna only shortly afterwards in 1873. Japanese art was a major topic and inspired many artists around the turn of the century, with the Vienna Secession, for example, organising an exhibition of Japanese woodcarvings in 1900. Working in the opposite direction, it was the Austrian Theodor von Lerch who introduced downhill skiing to Japan at the start of the 20th century. And even today, the many visitors from Japan continue to link Austria, and Salzburg and Vienna in particular, with enjoyment of classical music.

After the two world wars, Japan and Austria only resumed diplomatic relations in 1953. In 1957 the diplomatic legations in Tokyo and Vienna were elevated to the rank of embassies. Today the Pacific island nation is Austria's third most important overseas trading partner. Countless collaborations in the university, educational and cultural areas and around 30 partnerships between twinned towns are evidence of the good relationship between the two countries.

The attractive mini sheet to celebrate the 150th anniversary shows, among other things, the corvette SMS Erzherzog Friedrich, on which the trade delegation travelled to Japan in 1869, and a few lines from the treaty signed by Austria and Japan.