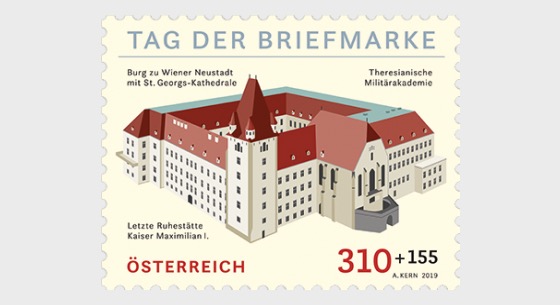 Maximilian came into the world in 1459 in Wiener Neustadt Castle. The city and castle of Wiener Neustadt had been founded long before that, in 1194, by Duke Leopold V as a defensive bastion against Hungary. The building work was funded in part by the ransom that Leopold had received from England for Richard the Lionheart. After being completely destroyed in an earthquake, the castle was rebuilt in the 14th century and was subsequently extended by Maximilian's father, Emperor Frederick III, who made it his main residence.

In 1751, Maria Theresa decided to house the military academy that she had founded in Wiener Neustadt Castle. A severe earthquake in 1768 caused extensive damage and the castle was again completely destroyed towards the end of the Second World War. However, it was rebuilt in its historic form and from 1958 on it was once again used as a military academy. On many of the old parts of the wall you can find the inscription AEIOU, which was used frequently by Frederick III, but the meaning of which remains unclear to this day.

Another historically significant building is St. George’s Cathedral, which was built around1440 under Emperor Frederick III. On its exterior wall, 107 coats of arms, some of them fictitious, intended to represent the illustrious lineage of Austria, are depicted around a life-size statue of Frederick III. Frederick's son Maximilian I, the “last knight”, was buried in a sarcophagus under the church’s main altar after his death in 1519; his heart, by contrast, is buried in Bruges in the grave of his wife Mary of Burgundy. Maximilian's cenotaph tomb, which his grandson Ferdinand I had built in the Court Church in Innsbruck, is empty.

The special stamp to celebrate the Day of the Stamp will be issued during ÖVEBRIA 2019. It shows Wiener Neustadt Castle with St. George's Cathedral, which is today the cathedral of the military ordinariate of Austria. As it is every year, the supplement of 1.55 Euro will be used to promote philately.