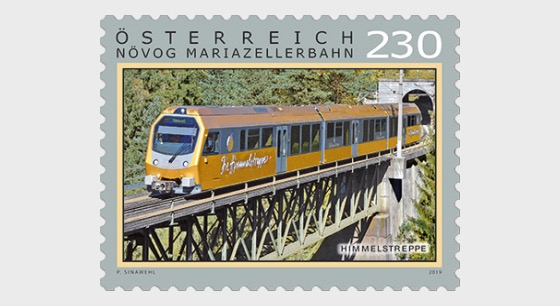 An engraved stamp from the “Railways” series presents the narrow-gauge Mariazellrailway. A trip on the modern “Himmelstreppe” (stairway to heaven) train is a particularlycomfortable way to enjoy the beautiful scenery.

To Mariazell by train

Mariazell with its famous basilica was already one of Austria’s most visited pilgrimagecentres in the 19th century, making construction of the railway indispensable. First thoughts on this were mooted in 1858, but it was not until 1896 that work actually started with the construction of the first section from St. Pölten through the Pielach valley to Kirchberg an der Pielach. This section of the narrow-gauge Mariazell railway opened in 1898, with the extension to Mariazell being completed in 1907. The first portion of the 84-kilometre-long track, the valley section, runs through the idyllic Pielach valley, also known as the dirndl valley. The section from Laubenbachmühle station via Puchenstuben and Annaberg to Mariazell is known as the mountain section: in addition to tunnels such as the almost 2.5- kilometre-long Gösing tunnel and spectacular viaducts, this section also offers an impressive view over the Ötscher and into the Erlaufschlucht (Erlauf gorge) with its jagged rocks. The engraved stamp shows a Himmelstreppe train making its way across the Raingraben bridge.

From historic to modern

The Mariazell railway was originally operated by steam locomotives. The historic Mh. 6 steam locomotive from 1908 is still used for nostalgic journeys today. However, the whole railway was electrified with alternating current as long ago as 1911 and is supplied by its own traction power network. Electric engines in the 1099 series were developed at the same time, some of which remained in use until 2013. The nostalgic “Ötscherbär” train isstill pulled by an electric engine from this series, the oldest electric narrow-gauge engine in the world, and also has an elegant first class saloon car.

In 2010 the NÖVOG, the Niederösterreichische VerkehrsorganisationsgesmbH, took the Mariazell railway over from the ÖBB. Since 2013 the railway has operated the new articulated “Himmelstreppe” trains. Additional first class panorama coaches with huge panoramic windows run at weekends and on bank holidays from May to October and during the Advent period.