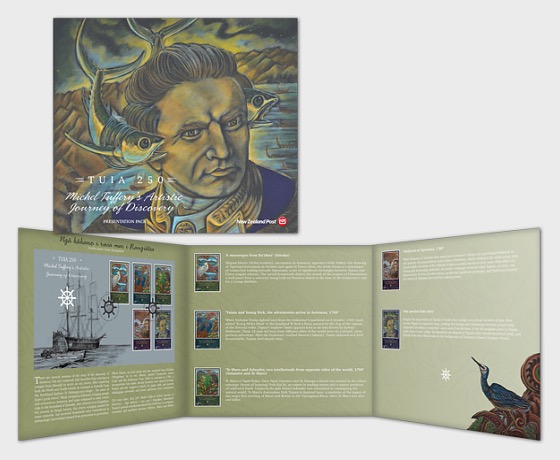 When Tupaia, an arioi priest and navigator from Ra‘iātea, guided Lieutenant James Cook and the Endeavour from Tahiti to Aotearoa in 1769, a reconnection was made between Māori and their ancestral homelands. As featured on these stamps, New Zealand artist Michel Tuffery has created original artworks in response to his discoveries about where his personal history meets that of these first encounters.

Through artworks by New Zealand painter Michel Tuffery, this stamp issue illuminates the role of arioi priest and navigator Tupaia in guiding Lieutenant James Cook and the Endeavour from Tahiti to Aotearoa in 1769.

Here, the white heron/ kōtuku is a messenger of connection looking towards Opoutama, a site of significant exchanges between Tupaia and Ūawa tangata whenua.

Tupaia’s nephew Taiato appears here alongside a fellow 12-year-old boy from the other side of the world. It was Nicholas Young who sighted land from the Endeavour’s masthead on 6 October 1769.

$2.60 Te Maro and Solander, two intellectuals from opposite sides of the world, 1769

Te Maro’s descendent Nick Tupara is depicted here in place of his ancestor who was killed at this tragic first meeting of Māori and British at the Tūranganui River.

Here we see Tupaia as migratory tuna, guiding Cook on his voyage and translating between people long separated yet always connected – seeds sown from Ra’iātea.

Tuffery’s paintings explore the roles played by Tupaia, his arioi acolyte and nephew Taiato, and members of Cook’s crew whose legacies have received little attention. Find out more about the untold history of Tupaia and these first encounters between Europeans and Māori with this presentation pack, written by University of Auckland Senior Research Fellow Dr. Billie Lythberg.