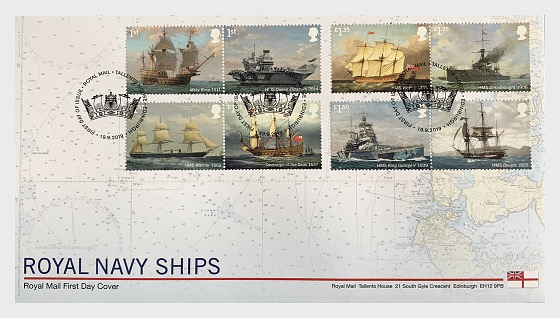 The oldest of Britain’s armed forces, the Navy is known as the ‘senior service’. As an island nation, Britain’s prowess in ship design innovation and navigation has been instrumental in its history. Royal Mail is paying tribute to the Royal Navy by featuring eight ships from its illustrious history including the Mary Rose launched in 1511 and the most recently commissioned ship, HMS Queen Elizabeth, which was launched in 2014.

British naval power truly began with the Tudor monarchs. In 1509, the newly-crowned King Henry VIII ordered a rearmament of the fleet and in this era great ships of 600 tonnes and more were built including the Mary Rose.

In the 17th century, King Charles I undertook the next major programme of warship building, with his fund-raising contributing to the outbreak of the Civil War. The Navy expanded further to become the most powerful in the world. Under Charles II the Navy became an independent national entity with the title of ‘Royal Navy’. By the end of the 18th century, the French Revolutionary War followed by Napoleonic War challenged the service as it faced the combined forces of the French, Spanish and Dutch fleets in locations as far away as the Caribbean. A series of victories culminating at Trafalgar (1805) led to the UK Navy becoming the dominant power in the world.

In the early years of the 20th century tactics changed with the introduction of the powerful Dreadnought ships, which with their speed and firepower, made other vessels redundant. By this time the German Navy was rapidly growing and was the only challenge to British naval superiority as the First World War commenced. The principle battle in the war was the Battle of Jutland in 1916 where, despite heavy losses, British numerical advantage was insurmountable, leading the German Fleet to abandon any attempt to challenge British dominance.

At the start of the Second World War the Navy was still the largest in the world with 1400 vessels. In the first years of the War, however, the Navy suffered heavy losses of battleships and troopships, but also managed to carry out major evacuations of troops from Dunkirk and Crete. The vital Atlantic supply lines were vulnerable to submarine attack and the Navy’s role in keeping the supply lines open was critical to success in the war.

Following the war and the decline of the British Empire, the size and capability of the navy was reduced and the best condition ships refitted. One of the most important operations by the Navy after the Second World War was the 1982 Falklands Islands War, which provided a reprieve in proposed cutbacks and proved a need for the Royal Navy to regain an expeditionary capability. The Royal Navy also took part in the Gulf War, the Kosovo conflict, the Afghanistan Campaign and the 2003 Iraq War.

Resourcing the Navy remains a controversial subject but the new Queen Elizabeth aircraft carriers are a significant investment in Navy capability – these 65,000-tonne vessels are the biggest Royal Navy ships of all time and represent a radical new design for aircraft carriers.

1st Class Mary Rose: Launched in 1511, the Mary Rose famously took part in the Battle of the Solent against one of the largest enemy fleets in English naval history. It was during this battle on 19th July 1545 that the ship sank, with hundreds of sailors drowning and only around 34 of the crew surviving. It is not clear why she sank but an eye witness recalled that the Mary Rose had just fired all of her guns on one side and was in the process of turning around when she sank. About the painting; Painted by Geoff Hunt © The Mary Rose Trust/Geoff Hunt PPRSMA

1st Class HMS Queen Elizabeth: One of two new Queen Elizabeth-Class aircraft carriers, the ship was launched in 2014 and is the largest and most powerful warship ever built for the Royal Navy. Capable of carrying up to 40 aircraft, its flight deck spans an area of four acres. About the painting; painted by Robert G Lloyd specially commissioned by Royal Mail. Robert is a marine artist who is renowned worldwide within the maritime industry and amongst private collectors for his visually stunning and technically accurate maritime paintings.

£1.35 HMS Victory: Launched on 7th May 1765, HMS Victory had an unusually long service, leading fleets in the American War of Independence, the French Revolutionary War and the Napoleonic War. It was in the latter that she gained ever-lasting fame as the flagship of Vice-Admiral Nelson in the Battle of Trafalgar, arguably Britain’s greatest naval victory in which the French and Spanish were defeated. HMS Victory is now located at Portsmouth Historic Dockyard and as the Flagship of the First Sea Lord and Commander-in-Chief Naval Home Command is the oldest commissioned warship in the world. HMS Victory is shown broadside to port, from windward, in the English Channel with Rudyerd's Eddystone Lighthouse distantly visible beyond her stern. She is shown flying the flag of Lord Hood as Vice-Admiral of the Red (red at the fore), as she heads outward-bound with her squadron in 1793 for the Mediterranean, where she was Hood's flagship at the Siege of Toulon and the invasion of Corsica. During this period the Navy used different coloured ensigns to show the seniority of squadrons, with the red ensign being the most senior squadron. From the 1860s, the Navy revised this policy and just flew the white ensign. The Victory was floated out of dock at Chatham and the picture shows her as built except that she has been coppered.
About the painting: the painting is by Monamy Swaine © National Maritime Museum, Greenwich, London.

£1.35 HMS Dreadnought: Launched on 10th February 1906, the ship’s revolutionary ‘big gun’ design rendered all other warships obsolete and dominated the First World War era. Powered by Parsons Turbines she was two and a half knots faster than her rivals and carried twice the firepower of earlier battleships. At the start of the First World War, HMS Dreadnought was despatched to Scapa Flow as flagship of the Fourth Battle Squadron of the Grand Fleet and in March 1915 she became the only battleship to sink a submarine in the First World War.
About the painting: painted by H. J. Morgan and used with the permission of The Trustees of the Royal Navy Trophy Fund.

£1.55 HMS Warrior: The first ocean-going iron-hulled warship, HMS Warrior was launched on 29th December 1860 and was the pride of Queen Victoria’s fleet. Powered by steam and sail, she was the biggest, fastest and most powerful warship of her day, proving to be the ultimate deterrent. Having been painstakingly restored, HMS Warrior returned home to Portsmouth in 1987 where she serves as a museum ship.
About the painting; painted by Thomas Goldsworth Dutton, painting © National Maritime Museum, Greenwich, London.

£1.55 Sovereign of the Seas: Commissioned by Charles I in 1634 and was launched in 1637. She was regarded at the time as the largest ship in the world and was popularly known as the Golden Devil because of her heavy armament and gold ornamentation. In 1652 she sank a Dutch warship with a single broadside. Later renamed Sovereign and then Royal Sovereign, the ship was accidentally destroyed in a fire at Chatham dockyard.
About the painting: painted by Paul Garnett, painting © Garnett.

£1.60 HMS King George V: HMS King George V was launched by King George VI on 21st February 1939 and was commissioned into the Royal Navy on 1st October 1940. She was originally going to be named King George VI in line with the tradition of naming the first capital ship of a new reign after the monarch but King George VI requested that she bear the name King George V in honour of his late father. She was assigned to the Home Fleet at Scapa Flow, which remained its principal base until 1944. As flagship of the Home Fleet she took part in several North Atlantic operations, protecting the Arctic convoys and acting as a deterrent against the threat of the German capital ships, Bismarck, Scharnhorst, Gneisenau, Prinz Eugen and Tirpitz. In 1941, she led the fleet in the attack and sinking of the Bismarck in the North Atlantic. HMS King George V was also involved in the invasion of Sicily and was later redeployed to the new British Pacific Fleet as its flagship.
About the painting: painted by Robert G Lloyd specially commissioned by Royal Mail

£1.60 HMS Beagle: Launched at Woolwich Dockyard, London on 11th May 1820, HMS Beagle is famed for taking renowned naturalist Charles Darwin on his first expedition around the world between 1831 and 1836, his five-year trip being documented in his travel memoir, The Voyage of the Beagle. She was initially equipped with a 10-gun brig sloop but was refitted and assigned as a surveying vessel because there was no immediate requirement for her as a warship.
About the painting; painted by John Chancellor depicting her on her second voyage © Gordon Chancellor.
Note: Royal Mail has carried out extensive research on the flags depicted on each of the ships to check that they are correct, consulting experts in the National Maritime Museum, the Mary Rose Trust and the Royal Navy. In the case of the earlier ships it is impossible to verify whether or not the flags on the paintings accurately depict what was actually flown on the ships at the time.