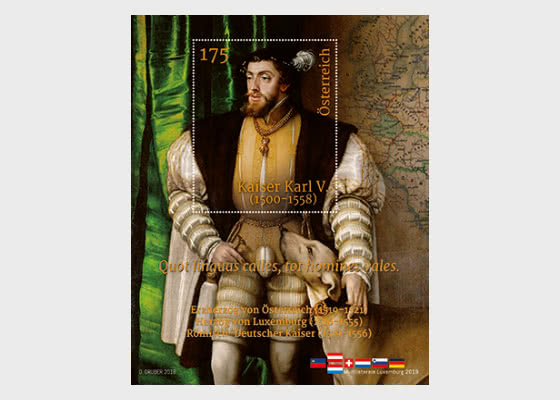 Emperor Charles V was the Habsburg monarch in whose realm “the sun never set”. Thisstamp block, a joint issue with Post Luxembourg, commemorates the powerful ruler.

Charles was born in 1500 in Burgundy, the son of Philip I of Habsburg. By marrying Philip toJoanna of Castile, Charles’ grandfather, Emperor Maximilian I, had cemented the Habsburgclaims to Spain.

When Philip I died soon afterwards in 1506, the six-year-old Charles was raised as the future ruler by his aunt Margaret, the governor of the Netherlands. In 1515 Emperor Maximilian declared that his grandson had come of age and Charles consequently became the Duke of Burgundy and the Burgundian Netherlands, and thus also of Luxembourg, which had fallen to the House of Burgundy in 1441. Following the death of the Spanish king,Charles became King of Spain in 1516. Upon Maximilian’s death in 1519, he also inheritedthe title Archduke of Austria and became Roman-German King, subsequently also becoming the Holy Roman Emperor.

Charles V saw himself as the defender of peace and of the faith, whilst at the same time endeavouring to extend his dominion in the rich new colonies in South America. Throughout his life Charles V was embroiled in conflict with France, and the Reformation under Martin Luther also began its triumphal procession within his realm. In 1556 Charles withdrew from his posts and passed the Spanish territories on to his son Philip II. His brother Ferdinand had already been Archduke of Austria since 1521. Charles V died in 1558 in a monastery in Spain.

As the ruler of a global empire, Charles V could speak not only French, Flemish and Latin but also some German, Italian and Spanish. His pronouncement “Quot linguas calles, tot homines vales” (“As many languages as you know, so many separate individuals you are worth”) is today often used as a symbol of a globalised society, whereas Charles probablyrather intended it as an expression of his claim to power. The stamp block shows a portrait of Charles V with his dog painted by the contemporary artist Jakob Seisenegger, who is considered the originator of the full-length representative portraits of the Habsburgs. The work served as a model for a famous portrait of Charles V by Titian.