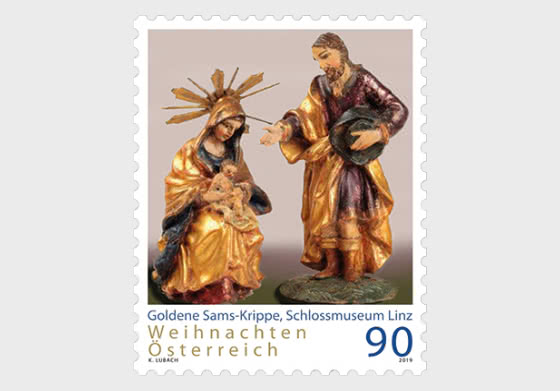 The Christmas stamp shows carved figures of Mary and Joseph with the baby Jesus from the historic Goldener Sams nativity scene in the Schlossmuseum Linz.

The nativity scene already has a long history. It was originally displayed at Christmas in the parish church of Bad Ischl in Upper Austria's Salzkammergut region. It was subsequently acquired by Johann Bramberger from Bad Ischl, known locally as Sams, who gave the nativity scene a new home in his house at the foot of the Siriuskogel mountain. Bramberger was one of the first people from Bad Ischl to be awarded the gold medal for military valourduring the First World War, earning him the nickname “Goldener Sams”. The nativity scene could be seen in Bramberger's house “behind the Hundskogel”, as the Siriuskogel is still called by the locals, and before long the owner's name became attached to the scene, whichwas henceforth referred to as the “Goldene Sams-Krippe hinterm Hundskogel”. In 1955 the Upper Austrian State Museum acquired the nativity scene and today it is on display in the Schlossmuseum Linz.

The pastoral nativity scene includes more than 160 carved figures and a representation of the town of Bethlehem in the style typical for town houses in Bad Ischl in the mid-19thcentury. In its present configuration it is almost 4 metres wide and 1.45 metres deep. The figures date from the period between 1780 and 1860, the original figures having been added to repeatedly. This means that the scene can be changed to show, for example, the search for an inn, the murder of the innocents in Bethlehem or the adoration of the Three Kings with their large retinue. Even today, setting up the nativity figures is a carefully preserved family tradition in the Salzkammergut region, and is protected as part of our intangible cultural heritage by UNESCO.

The nativity figures were made by local carvers from the region, but their names are notknown. Carving nativity scenes, referred to as “Schnegern” in the Salzkammergut, was apopular way of earning extra income for forestry workers during the winter. Some of the individual figures have been painstakingly decorated. The shepherds are presented in the typical costume for the region and a careful look at many of the little scenes will reveal features from the local surroundings.