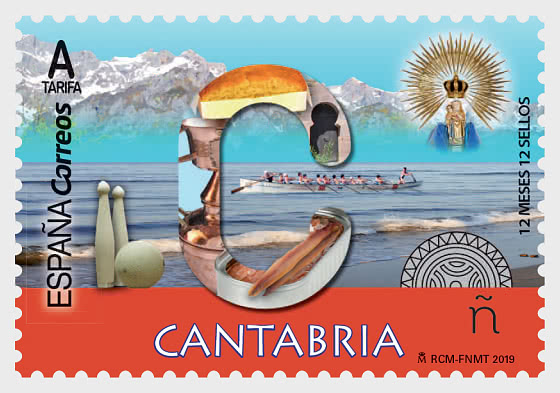 In Cantabria they bid farewell to September with the ‘Día de Campoo’ (Festival of National Tourism Interest) on which ‘Reinosa’ is at the centre of folklore and regional traditions. This ushers in October, the month dedicated to Cantabria in the 12 MONTHS 12 STAMPS series. The province of Cantabria is rich in archaeological sites of the Upper Palaeolithic, although the first signs of human settlement date back to the Lower Palaeolithic. The Altamira Cave paintings, dating back to 37000 B C, stand out in this respect. Along with nine other Cantabrian caves. The Picos de Europa mountains appear in the background of the stamp, a mountain range consisting of three perfectly defined massifs: the western or ‘Cornión’, the central or ‘Urrieles’, and the eastern or ‘Ándara’. The Naranjo de Bulnes or Picu Urriellu (2519 m), the Peña Vieja (2613 m), the Llambrión (2642 m), and the Torre Cerrado with its 2,646 meters is the highest summit of the Picos de Europa all rise from the central massif. 'La Virgen de la Bien Aparecida' is the patron saint of Cantabria. Her festival is held on 15 September and she can be found in a sanctuary in Hoz de Marrón (Ampuero). The image of the ‘Virgen Bien Aparecida’ is small (21.6 cm including the pedestal), possibly the smallest across Spain. It is no older than the fifteenth century and is still intact, covered with elaborately beautiful vestments. There are currently four versions of the Cantabrian bowling game 'Bolos'. Of the four, 'Bolo Palma' is the most well-known. The four versions are grouped into two families: 'Derribo', meaning ‘demolition’ (the object of the game is to knock over the most pins); 'Bolo Palma' and 'Bolo Pasiego' fall into this category. 'Pasabolos', meaning ‘pass the pins’ (the objective is to throw the balls as far as possible past the lines to gain the most points); 'Pasabolo Tablón' and 'Pasabolo Losa' fall into this category. 'Anchoas en salazón' (salted anchovies) date back to the Roman Empire (evolving from garum) and are documented as having been produced in Spain since the year 1250 when Alfonso XI granted the town of Laredo in Cantabria permission to make 'salazones' for the rest of Castile. It wasn’t until 1880, when the Italian fishing fleet set up a 'salazón' factory in Santoña, that the area became one of the largest producers in Europe. In making this product the anchovies (Engraulis encrasicholus) undergo a preparation process[ ] whereby after having been cleaned, filleted, salted and soaked in vegetable oil (olive oil), they are put into tins, glass jars, or wooden barrels.[] The Santa María de Lebeña Church is found in the beautiful region of Liébana, Cantabria, some nine kilometres from the capital, Potes, at the entry of Desfiladero de la Hermida, surrounded by immense white mountains that contrast the greenery around the monument. This church is a paradigm of the Mozarabic or ‘repopulation’ style demonstrating the three defining influences of the style: Asturian, Visigothic and Muslim. A detail of a copper alquitar still used for the distillation of 'orujo'. The Lebaniegos made 'orujo' in their homes for centuries, a tradition that has led to one of the most important industries in the Liébana region. Liébana currently produces different varieties of 'orujo' (a clear spirit). The most common variety is called 'Blanco', which comes directly from the alquitar; the other varieties are produced by mixing the 'aguardiente' with sloe, morello cherry, mountain ironwort (Sideritis hyssopifolia) or honey. 'Sobao pasiego', a protected area whose centre of production is located in the region of Pas, next to the region delineated by the rivers Pas and Pisueña. This is a sweet made from a mixture of wheat, butter, sugar and egg. It is served in squares, in cupcake paper (traditionally called a gorro or ‘hat’) folded to create the characteristic wings. A 'trainera' is, originally, a Cantabrian coastal boat propelled using oars and sometimes a sail. These boats were traditionally used for fishing but have now been modified, making them lighter for use in competitive fixed-seat rowing regattas with strict rules concerning weight, dimensions, etc. The standard measurements are 12 m in length, a 95 cm bow, a 75 cm stern, a hold depth of 60.5 cm and a minimum beam length of 1.72 m. []Today, a 'trainera' crew consists of 13 oarsmen and one cox. The photograph that appears on the stamp is the work of artist Ángel Obregón. The 'Barros Stele', one of the Cantabrian Stelae, is a gigantic stone disc from the 4th century BC found in Barros (a region of the Los Corrales de Buelna municipality in Cantabria), which was declared a place of cultural interest in 1985 It is 1.66 m in diameter and 0.40 m thick, and rests on a base measuring 1 m in height and 0.80 m in width, an impressive size for a work of this type.[] It is made from natural sandstone. Today it is located in the Barros 'Parque de las estelas' (‘Stelae Park’), which opened in 2001. The red stripe along the bottom represents the red of the Cantabrian flag.